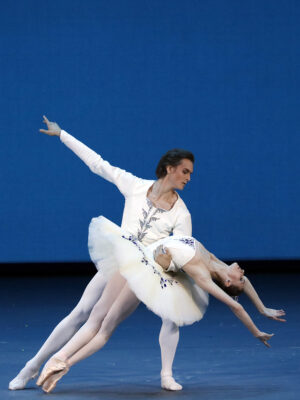 The scandals at the Bolshoi Theatre over the past decade have given the theatre a name synonymous with disgrace. The acid attack on Sergey Filin, Nikolai Tsiskaridze’s sharp criticisms of the renovation process, the advent of a new administration and the changing of the guard (and some of the troupe’s members) as a result. Things have quieted somewhat, but the inherent challenges faced by Russia’s largest ballet company remain unchanged: the traditional hiring of various graduates versus the dancers entering laterally based on connections or worse, bribes; and the perpetual challenge of finding quality dancers in a system and city where hundreds of ballet schools and teachers are churning out products at various levels of excellence.

Against this backdrop, reviving ballets that ran previously in the repertoire or adding new ones sets the bar high. The Bolshoi chose to bring Balanchine’s Symphony in C back to the stage after a long haitus, and paired it with Maurice Bejart’s avant-garde Gaité Parisienne for four nights in mid-June. The result was a minor victory on some fronts, but a disappointment on others.

If you’ve witnessed the Mariinsky dancing Symphony in C, you have some idea about the technique required and the impression left by finely honed bodies executing pristine positions to the music of Georges Bizet. This tutu ballet puts everything on display. It is a ballet where minor flaws in technique or training become glaring visual blunders. Accuracy and musicality are everything, and without a solid training base, neither is possible.

Symphony started out on a high note with the First Movement soloist, prima Ekaterina Krsyanova, alongside a tireless, enthusiastic Vyacheslav Lopatin. Both dancers led their supporting corps members with grace and authority. Krysanova’s lovely port de bras contrasted appropriately with sharp echappés and precision footwork. Lopatin’s big smile and relaxed assuredness made bouncy sissones appear second nature. Maria Vinogradova, resident powerhouse dancer, dove on stage in the Third Movement alongside the elegant Semyon Chudin like wildfire. Although the staging of this section is visibly altered in two places from that shown at the Mariinsky (the tendu pose of the leading couple features an allongé arm rather than first position; and the diagonal lifts eliminate the transitional developpé), Chudin and Vinogradova electrified with their energy and focus.

The most challenging Second Movement is normally the test of true adagio talent, usually reserved for the resident adagio technicians in a given company. After one has witnessed Uliana Lopatkina in this lingering, measured section, or even Ekaterina Kondaurova, it’s hard to imagine it danced any other way. (Incidentally, both of whom worked under Makhar Vasiev, during his years at the Mariinsky). Their renditions offer slow, controlled, unfaltering movement, perfect placement and utter musicality. Unfortunately Yulia Stepanova failed to cope in all of these ways, despite the utmost efforts of her partner, Artemy Belyakov to keep her steady. Balances failed, promenades proved unstable, and she stumbled more than once en pointe. In contrast, the reliable Belyakov appeared utterly heroic. One simply expects more from someone categorized as a principal dancer. 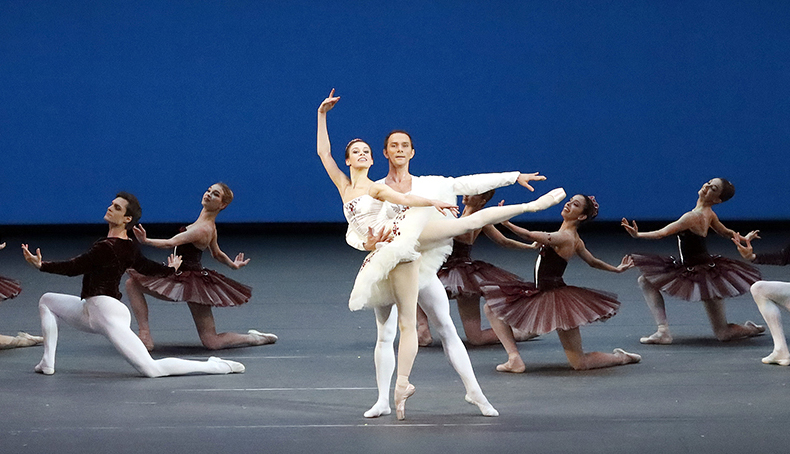 Above: the tireless Vyacheslav Lopatin (here pictured in another cast with Daria Kokhlova).

The Fourth Movement somewhat redeemed the ballet, where Ksenia Zhiganshina joined Mark Chino in a more energetic closing. Minor technical issues remained – raised shoulders in the supported turns, for example – but overall the troupe coped well with the crowded spacing that resulted from billing on the Theatres’ smaller New Stage.

Maurice Béjart’s Gaité Parisienne is an avant-garde, mixed genre work combining onstage singing, speaking and dancing in a pseudo-Broadway comedic fantasy. Difficult to precisely categorize, the work combines all of these approaches in a seeming parody on Parisian ballet using Offenbach’s music and operas as the starting point. In 1978, Béjart called it a mixture between a private diary and a humorous newspaper. But set on the Bolshoi (and perhaps elsewhere), the humorous component is mostly lost, leaving episodes of exaggerated dancing that at times seem meaningless. Two viewings gave Vaganova Today the opportunity to better understand the work, but we were still unable to fall in love with it.

On 14 June, Alexey Putintsev danced the leading role of the little man in red, Bim. Vyacheslav Lopatin appeared a bubbly Offenbach, dancing quick jigs with verve to the same musical theme throughout the production. Marfa Fyodorova danced a lithe Ballerina whose embellished port de corps clearly demonstrated Bejart’s vision of turn-of-the-century ballet as old-fashioned. Artur Mkrtchyan performed Napolean III (in all 4 performances) with conviction, strong jumps and clear dramatic expression. Fuad Mamedov, who recently joined the troupe from the Mariinsky, danced a dreamy Ludwig II of Bavaria under garlanded sets. And, in the final pas de deux, Maria Vinogradova joined David Motta Soares as the Lovers. Both dressed in white Greek-style tunics, they embodied the heartfelt emotion desired by Bim’s teacher in a series of non-intuitive promenades and turns. Here again Vinogradova’s bravura technique shown through, assisted by Soares consistent dependability in the partnered sections. 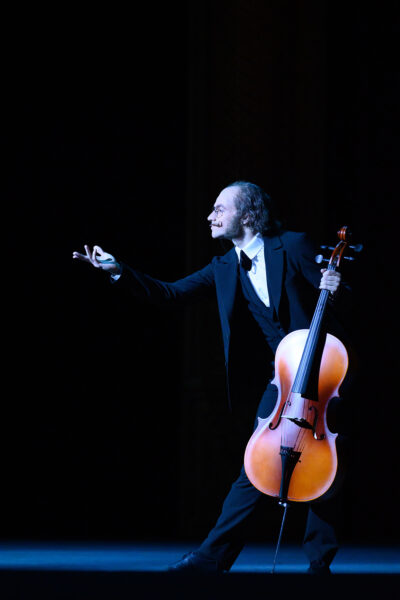 Gaité is a challenging choice for a repertoire addition, and the large-scale work now seems to have too many foci to make it easily loveable –or understood– by modern audiences. Its multi-layered approach requires the utmost nuance, and much of that was lost on some of the Bolshoi dancers. Yet Symphony in C remains one of the strongholds of Balanchine tradition, requiring technique and timing above all. As such it should not be inaccessible for a troupe like the Bolshoi. Throughout the rehearsal process, Artistic Director Makhar Vasiev spent considerable time ensuring the corps de ballet’s adherence to the tenets of line and placement, and overall, he succeeded in that endeavor. Sadly, either the company’s hiring practices have marred the soloist level, or there is simply not a large enough selection of the necessary talent to fulfill every soloist notch at top level. The company deserves to be lauded for their efforts in these grandiose restagings. For now, Bolshoi viewers will have to content themselves with handpicking performances that feature the best leading soloists, at least until the roster evens out. In the meantime, the sounds of Bizet’s score, visions of the ordered lines of the corps de ballet, and key moments from some of the company’s top ballerinas linger in the air even days after the performance. That in itself is an achievement.

Photos courtesy of Damir Yusopov. Sadly the Press Office does not cover all casts with their press photos as other theatres do. Top image: Olga Smirnova with Denis Rodkin in the first cast, First Movement. Third image is Igor Tsvirko as Offenbach in Gaite Parisienne.