George Balanchine’s Jewels dates back to 1967, but its composition is such that it is a timeless piece due to its depth of symbolism and pallet of both choreography and music. During this year’s Festival, the Mariinsky presented Jewels, exclusively using its own dancers, some of which are new and promising talents indeed.

The gem-based visual triptych, for those who have never seen it, centers on the idea of three gemstones, with one act dedicated to each. The composer for each section, the speed and nuance, and even the steps differ. Emeralds comes first to the hauntingly beautiful music of Faure, set in cool green tones. The score ranges from careful adagio tempi to faster petit allegro, and the choreographic patterns often use the theme of crossing: second arabesques, crossed arms, coup de pieds (crossing one leg behind the other at the ankle), and croisé positions. This optical weaving lends a specific effect to the movement, much of which underscores the French influence in ballet.

Daria Ionova danced the leading duet in Emeralds alongside the ever-reliable Maxim Zuizin. Ionova, a graduate of pedagogue Ludmila Kovalyova who also trained Diana Vishneva, is still in her first season with the company and still in the corps de ballet, but head of the troupe Yuri Fateev seems intent to include her on the list of those to be soon promoted. A petite dancer with long limbs, she offers perfect port de bras positions that are expansive without leaving academic limitations, nicely arched feet and perfect turnout. In the “stencil” promenade, she seemed to be a perfect protractor with the tendu foot deliciously extended. Zuizin’s solo matched hers in terms of academic purity, from lovely hands to high insteps that many ballerinas would envy. 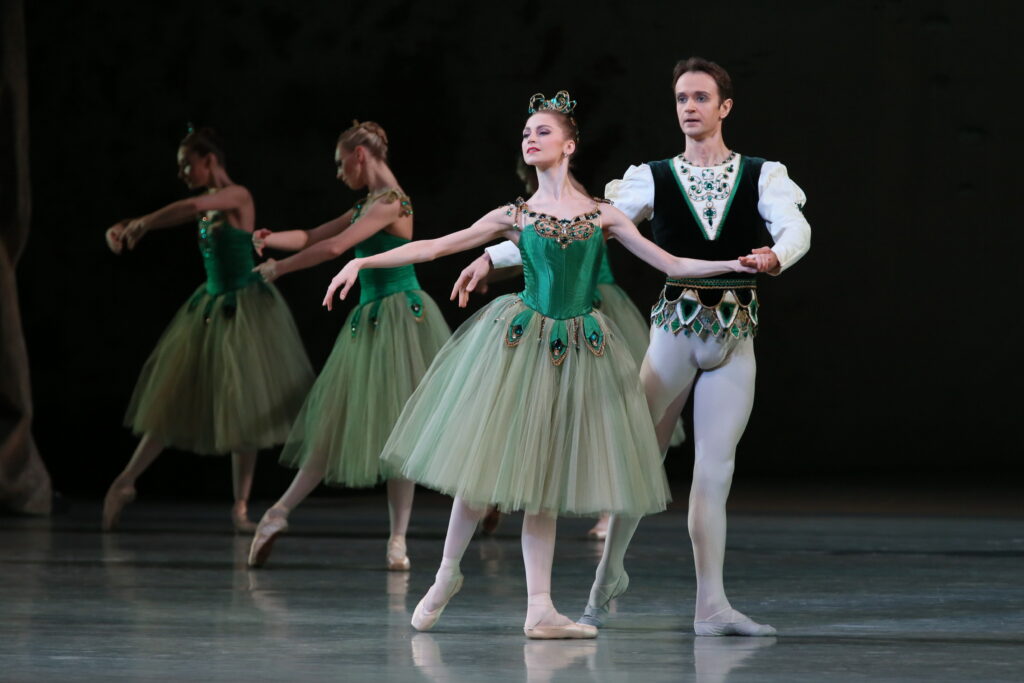 Maria Iliushkina, a brunette with a delicate face and the ability to infuse lyrical nuance into the balancé sections, danced the second leading soloist in the lovely “foot tap” variation. In the pas de trois, Laura Fernandez and Valeria Martinouk joined David Zaleev in perky jumps about the stage. Fernandez has nice extensions and nicely sculpted legs although her hands tend to stray from academic positioning. Zaleev’s double tour was airtight, and Martinouk provided energetic ebullience throughout. 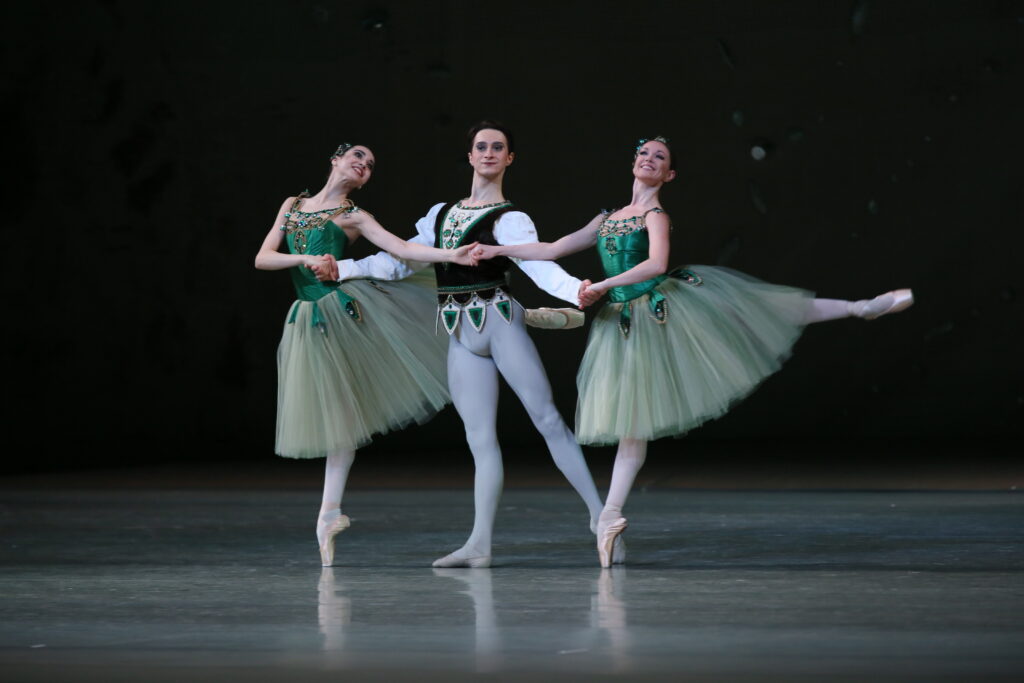 Rubies comes next. Set to the music of Stravinsky, this fast paced, shot-out-of-a-cannon work is said to epitomize the speed of America, in particular Balanchine’s own New York City Ballet dancers. With Broadway-esque influences –playful flirting with the audience, rodeo-type steps, high legs and painfully short skirts– it is about as far from classical Russian ballet as one might imagine.

In Rubies, tireless powerhouse Nadezhda Batoeva took to the stage with Philippe Styopin as the main couple, while Ekaterina Chebykina danced the first soloist role. Chebykina’s attack was daunting in its aggression, but never inaccurate. Batoeva, who infuses this role with majesty, has the ability to command the stage from the very start. High battements are second nature to her and never forced; indeed the brush into penché seems more like a playground romp than an attempt at gymnastic display as is often the case with some primas. Styopin matched her energy and took to the caper with good humour and attentive partnering, both of them flirting alternately with each other and with the audience. There is an ease and freedom to Batoeva’s delivery that cannot be taught and that few possess. 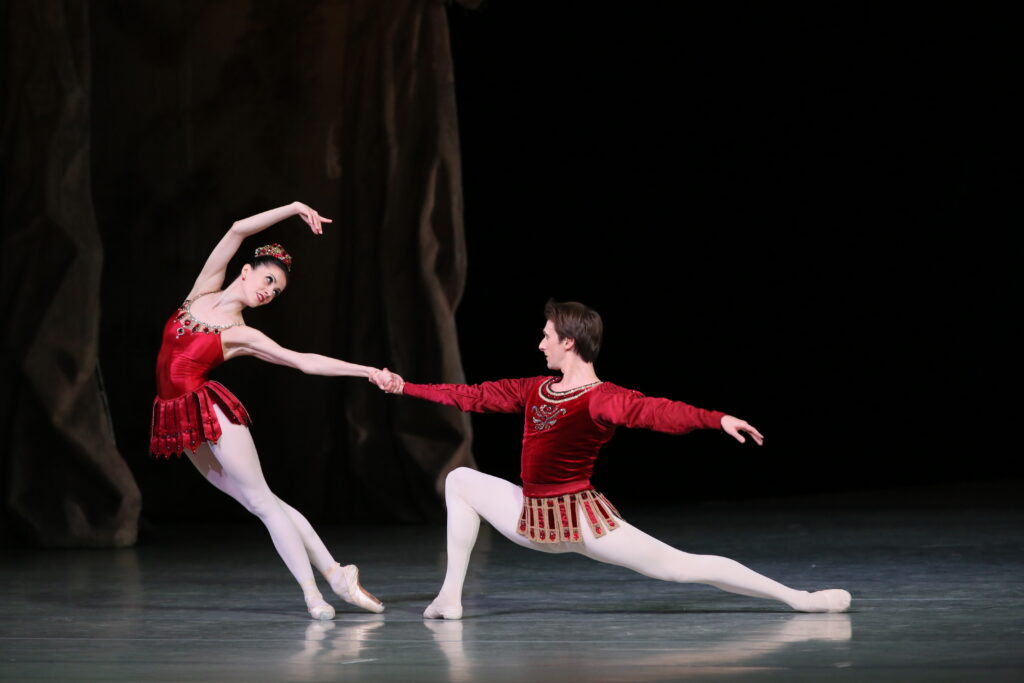 The last of the triptych is Diamonds, said to pay homage to Imperial Russian Ballet and pure classicism, and fittingly set to Tchaikovsky’s Third Symphony in D major. It includes a grande promenade at the finale, and formal dance patterns in the ensemble work.

In this performance, now first soloist Maria Khoreva took the leading role in Diamonds alongside her cavalier, principal dancer Xander Parish. Khoreva, who already has an Instagram following of 288,000 people and interviews in every major dance-based magazine to date, is already an internet sensation, as well as a Nike brand ambassador. As such one would naturally have doubts about the quality of her dancing — perhaps it’s all just marketing expertise? Thankfully, her debut in Diamonds put any such doubts to rest. Khoreva’s dancing is characterised by impeccable timing, innate musicality, a pliant back, the ability to fill out the adagio sections, and flexible, high arches that are simultaneously strong and controlled. Her épaulement is ideal and she never leaves the classical framework for the sake of extension or show. She infused this role with exceptional nuance and maturity beyond her years. She proved to be in reliable hands alongside Xander Parish, whose split jetés and double tour in the coda created sparks, and whose series of tours à la seconde revealed an exquisitely pointed working leg. Khoreva’s coda section includes the challenging sequence of sauté arabesque, pas de chat, soutenue, piqué-fouetté, which she performed without falling behind the music or blurring the delivery. 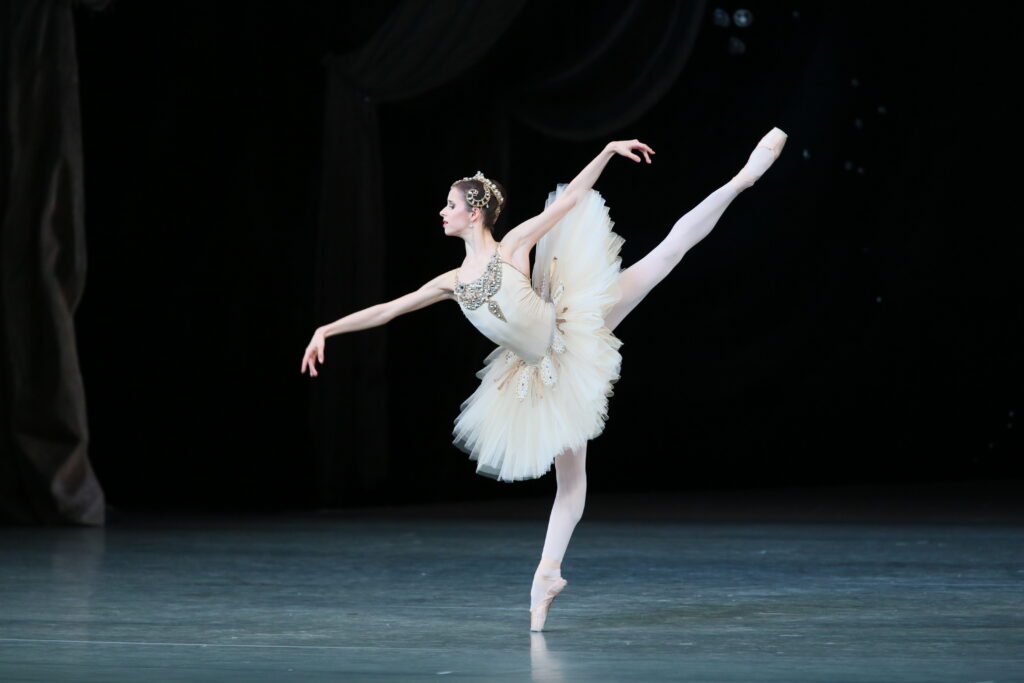 In the corps ranks, despite nearly 20 years in the company now, Svetlana Ivanova remains the most slender and youthful looking, with the most academically faithful body. Her purity of line is so mesmerizing that it’s easy to watch just her alone. There are however numerous new dancers in the corps now compared to just a few years ago — to the extent that many familiar faces have left the ranks. Yet the grande promenade at the finish appeared well synchronized, and for the most part the Diamonds ensemble work is commendable. 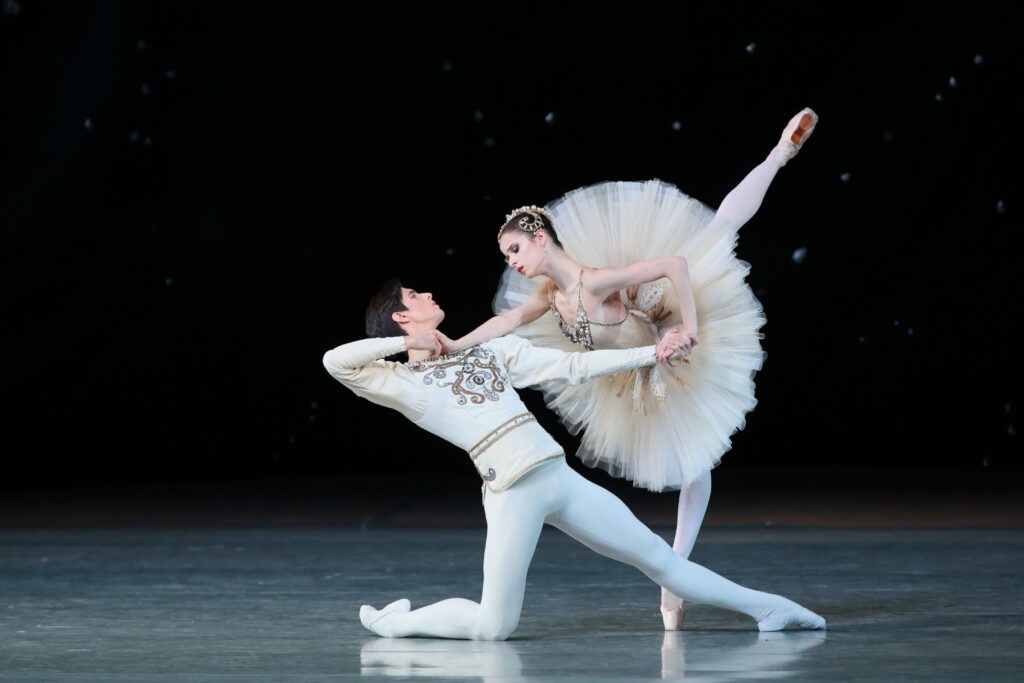 Peter Martins, present in Petersburg for several weeks now, has been coaching the company in both Jewels and Serenade. Despite the scandalous reputation that precedes him, the invitation reveals just how much Martins is revered by Yuri Fateev as a proponent of Balanchine. Many dancers commented on how helpful he has been during rehearsals. Hopefully Martins saw what Balanchine intended in this performance, for it is unlikely that New York City Ballet would deliver Diamonds, in particular, with the same innate understanding of imperial displays as the Mariinsky dancers are able to do. The history of the Vaganova Academy’s roots in the Imperial Ballet school are just one reason why matching Diamonds with the source of its inspiration is a genius move. In this company, Jewels is synonymous with what the Mariinsky has to offer.