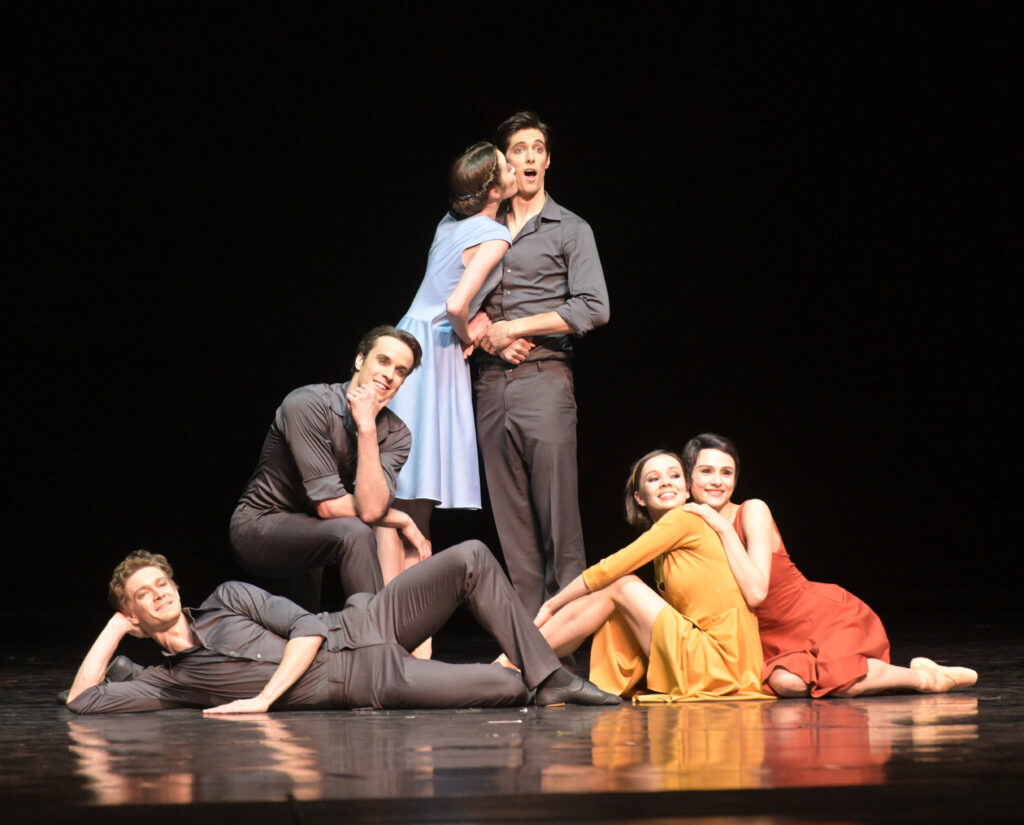 The Young Choreographer’s Workshop has been held annually (except for 2018) during the Mariinsky Ballet festival as a means for amateur choreographers to present their creations in order to, in the best case, ignite or shift into a choreographic career. The best works from the festival are said to be adopted into the rotating repertoire (although in practice, those that are, run quite rarely). This year the workshop offered seven works by both known and unknown creators, starting with the more experienced Yuri Smekalov and ending with the promising Ilya Zhivoy.

With at least 9 years of choreographic experience behind him, beginning with his Presentiment of Spring and Bolero Factory in 2010 at the Mariinsky, Smekalov is perhaps best known for staging The Bronze Horseman in 2016 and Paquita along with Yuri Burlaka in 2017. His style culls elements from his 10-year background with the Eifman Ballet troupe, and combines both emotional and abstract components in either story ballets, as mentioned above, or abstract works. His Concerto for Contrabass to music by Giovanni Bottesini is decidedly the latter. The work includes a corps de ballet dressed in grey, composed of both men and women, the women carrying conductor batons. Smekalov himself appears from behind a triangular scaffold, in a long sleeveless vest, and seems to meditate through his solo movement. Viktoria Terehskina and Daria Ionova, both in sleek grey leotards with bare legs, join him. Theirs is not a romantic relationship but more one of a creator and muses: Smekalov appears to be a magician or godly figure of sorts. Swivel steps, plenty of bourées with batons held aloft for the corps, and melodic choreography with complex patterns characterize much of the work. Indeed, the programme description states “Conductor is time. Triangle of dependence. Music is an opportunity to control ageing by stopping or accelerating time.” While the overall meaning of the work is still unclear, it is certainly an essay in reflection. 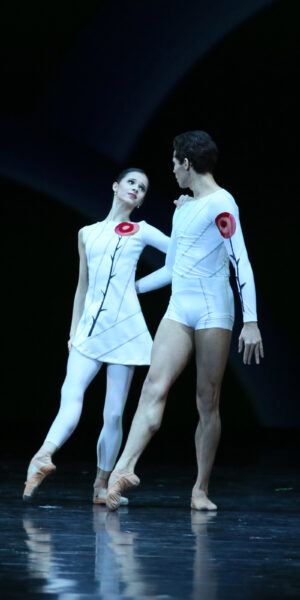 Another experienced choreographer with works dating back to 2011, Dmitry Pimonov presented Concertino Bianco to music by Georgs Pelecis. In it Victor Caixeta and Maria Khoreva don white unitard outfits with large red roses on the shoulder by famous Russian designer Tatiana Parfionova. Three other demi-soloist couples, Ekaterina Osmolkina, Elena Yevseyeva and Alina Somova, dance alongside Yevgeny Konovalov, Maxim Zuizin and Andrey Ermakov. In spite of Pimonov’s extensive experience working on musicals in Saint Petersburg (at least six to date), the work has decidedly classical undertones. A simple but highly effective partnered soutenue section is nothing less than charming. In the duet between Somova and Ermakov, he rocks her on his knees before kissing her in the final moments, which leads to her bourrées offstage, turning as if a rose on a vine. A lively coda section follows, picking up the pace, in which Caixeto, Konovalov and Zuizin dance and almost-Cossack jig. Khoreva later darts in with jétés; Evseyeva and Osmolkina carry out sharp pointe work and turn like tops. The theme is abstract, but the choreography throughout Bianco is cohesive and engaging and ends on a bright note.

Perhaps the greatest revelation in this year’s workshop, however, was Alexander Sergeev’s choreographic debut with At the Wrong Time set to music by Heitor Villa-Lobos played on an upstage grand piano. With 1940s influenced costumes by his wife, prima ballerina Daria Pavlenko, the ballet is a composition on three couples with shifting moods. 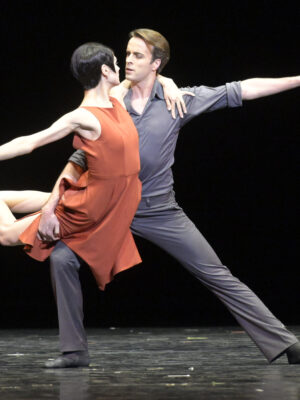 Kristina Shapran, in a bobbed wig, stands center stage and starts moving through a lyrical solo to the infectious score when Konstantin Zverev enters. Their intense duet implies a tumultuous but star-crossed relationship: the magnetism of their attraction and the impossibility of the union. An allegro section includes fast lifts and promenades with her leg held en avant. He later rocks her slowly as she hangs off his shoulder; she cups his head in her hands, hinting with longing at the impossibility of their union and the ensuing angst. With erect carriage, Zverev’s short solo seems a mutual declaration of feeling, but Shapran repeatedly avoids him until he finally carries her offstage.

Xander Parish, hands pocketed, seems a swanky, debonair lad before Anastasia Nikuina enters in a pale blue dress. He gazes at her lovingly and the two enjoy an easy duet, his quick chainé turns seeming to be a admission of interest. Yet Parish’s attempt to kiss her at the end is stopped with a hand just inches from her lips. 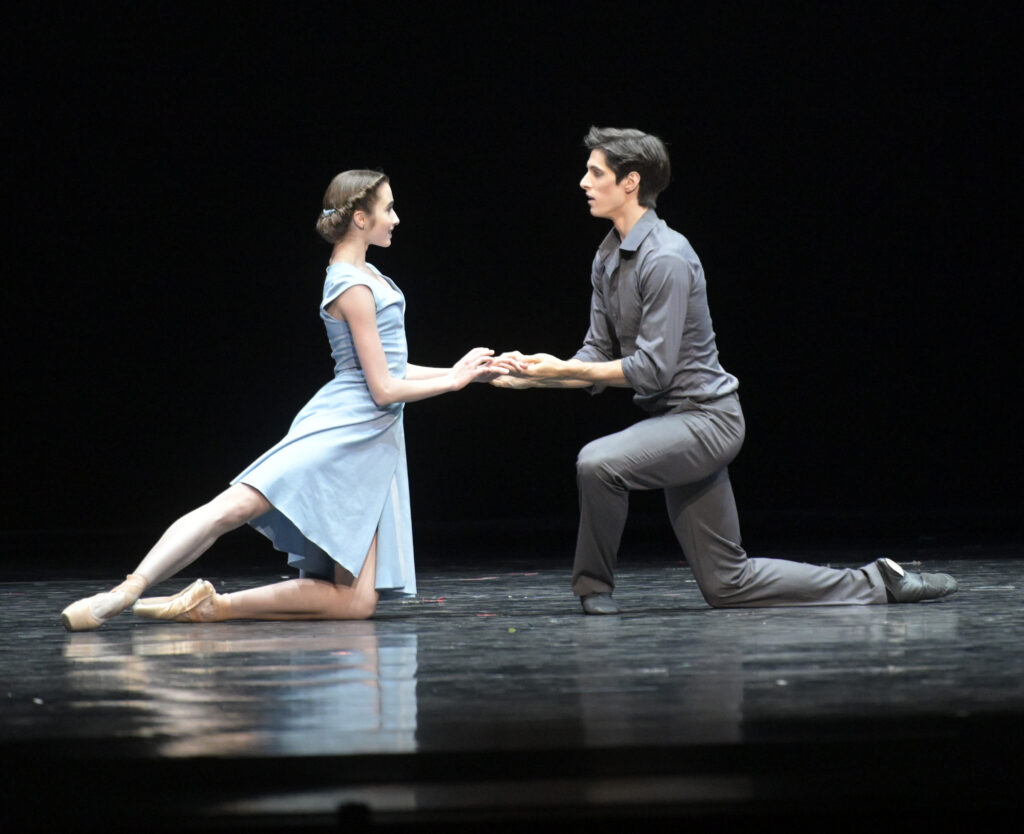 The third couple, Maria Shirinkina with Alexei Timofeyev, appear caught in a playful game. Her shoulder shrugs highlight a nonchalant attitude. Sergeev’s choreographic language is his own: Timofeyev lifts Shirinkina in double retiré passé and tips her from side to side, as if a pendulum. Later a lovely cannon shows off suave moves by the four men. The unique choreographic combinations, combination of three takes on love, the 1940s setting, and even the costumes make one hungry to see more of Sergeev’s work in the future.

Ilya Zhivoy’s work, I’m Not Scared, clocks in at 50 minutes, but halfway through you are hooked. The ballet premiered in August 2018 in Switzerland, and is explained in the notes as follows: “a revolution inside one man… the path from hatred and denial to understanding of unavoidability and acceptance.”

Set on Xander Parish with 5 other dancers, the work begins with the theme of “reaching towards the light”, which filters from the ceiling in smoky rays. Each dancer repeats the same movements but they all move independently. Five dancers tiptoe around the edge of a square platform when Parish grabs two of them to join in a dance. The moment is humorous, but later that lightheartedness shifts to fearful angst. Pairs of dancers explore each other’s hands, but the relationships are far from definitive. At one point one of the girls dances with another, moulding her as if clay. Parish’s later extensive solo expresses the anguish of an outcast as he has supposedly hurt one of the females, and is quickly ostracized by the other 5 for doing so. Parish emoted like never before in this choreographic monologue, which showed the extent to which he’s able to act and effectively express not just princely adoration, but torment and grief.

Not Scared grows on the viewer as one watches, and the full depth of its message remains elusive, but in that mystery lies interest. It will be interesting to see if this or any of the other works are folded into the Mariinsky’s rotating repertoire after the festival.