Masha and Vlad: Power Couple at the Bolshoi 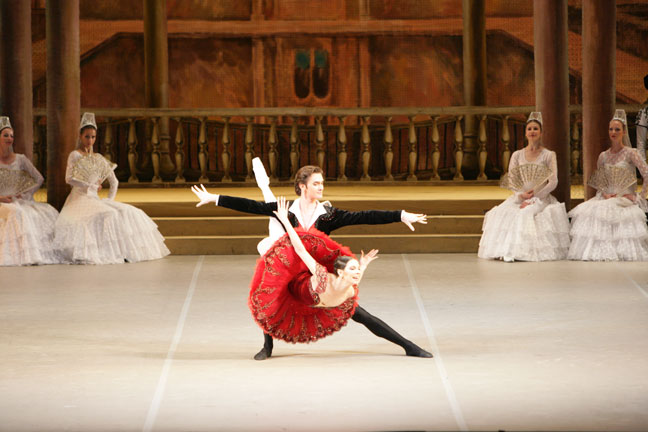 It’s no secret to those in the know that Maria Alexandrova and Vladislav Lantratov (“Masha” and “Vlad” – as they at times affectionately refer to each other) are two lovebirds whose deep connection is visible both onstage and off. VaganovaToday sat down with the power couple to talk about their personal and professional lives, their insights about ballet, and their dreams for the future.

How did each of you get started in ballet?

Vladislav: My parents worked at the Stanislavsky, mom was a leading character dancer, my father was a leading premiere danseur, and my brother attended the Moscow Choreographic Academy and joined the Bolshoi. I did the same. As I recall, there was no discussion if I want to start ballet or not, I loved spending time at home in the courtyard with other boys my age, but later when I started to perform, it drew me in and even now it still does.

Maria: I have the opposite story, no one in my family was connected with the theater, either dramatic or musical, no one was connected with theatrical arts. I made my decision consciously at age 8, I specifically chose ballet. I didn’t dream about fame or money or getting married well or being a swan or wearing a tiara or pointe shoes. I knew precisely that this profession would teach me about life, that I would understand the world of adults and most importantly, that ballet is done in silence. Because at that moment the world of adults really scared me. I had great relationships at home in our family with my parents, but when you leave that circle you encounter other adults and I didn’t understand why people acted the way they did. But the theatre for me, the ballet profession was understandable to me. I saw a film about ballet on TV and that it differs from just ‘dances’ in that it is studied and taught.

I danced in a small performing group first, it was the Soviet Union at that time, and there was a very high level of amateur performing groups with wonderful repertoire and costumes. We performed frequently. The troupe included children from age 5 to 15 and there were roles for everyone. So the issue of the stage was understandable for me. And I understood that there were different gradations of what you could study. It was a very conscious decision — as a child I was very wise. I confronted my parents with the fact that I wanted to do this. And they were seriously afraid for me because it is a difficult profession but they  both supported me in my choice. For my mom it coincided with one of her dreams, she had always wanted to have a daughter Masha who danced. On the one had she supported me but was scared also because she understood that the competition was high and we had no connections to help us. But it all worked out