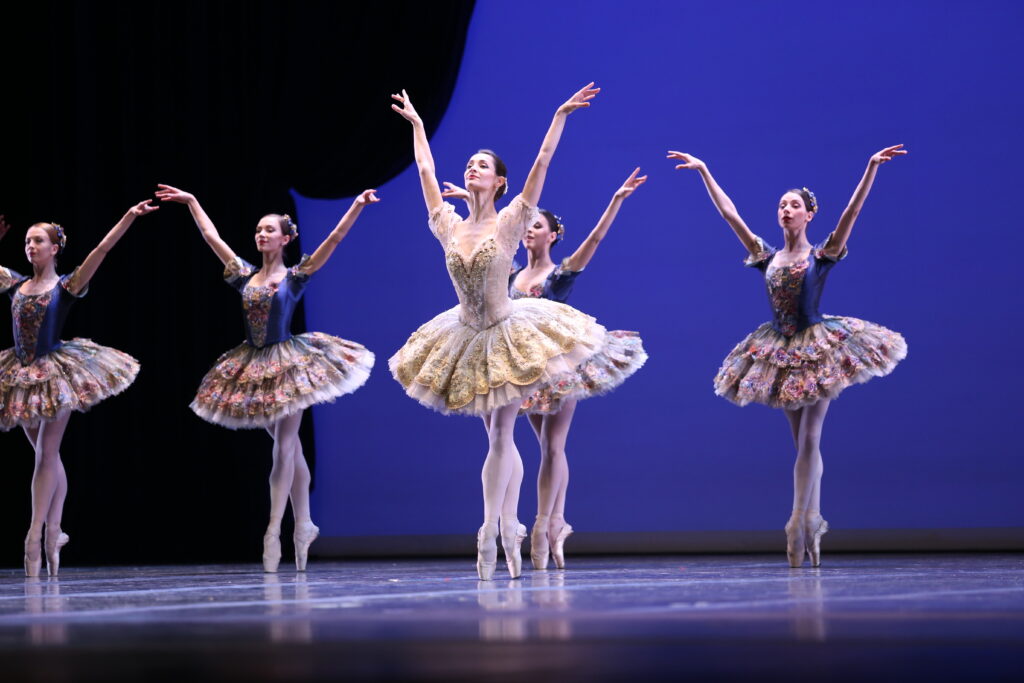 To mark the Stanislavsky Nemirovich-Danchenko Theatre’s 100th anniversary, Artistic Director Laurent Hilaire created a gala concert featuring a new choreographic work and international guest stars. On July 29th and 30th, all of Moscow clamoured to attend the two-night extravaganza which featured the best this Moscow troupe has to offer.

In unusual fashion, the highlight of the evening in fact came first. Choreographic talent Maxim Sevagin, a Vaganova graduate who displayed his ability to set classical ballets even as a student, and set works for the Mariinsky’s choreographer’s workshop in 2014 and 2015. Since joining the Stanislavsky in 2016, he has continued to create, refining his art in both more avant-garde and neoclassical genres. Bloom, an aptly-named one-act ballet set to the melodious music of Antonin Dvorak, uses movement that implies all of the nuances of flowers blossoming in a field. Women en pointe clothed in simple lilac dresses twirl and entwine their arms, while men in high-waisted lilac pants twist like reeds in the wind. The ensemble work seems to be impressionistic movement: if Monet could choreograph, this is what might result.

Nuances such as women performing tiny “flutter” kicks in the air, or the ladies swiveling through piqués in coupe de pied, the arms set in unique positions, suggest rose petals on stage. Wrists touching and slightly flexed in a group pose, they appear to be a growing vine of beauty. Three men in unison fouetté through écarté into arabesque as if an autumn breeze has blown them away. And in the playful, faster section, men cross the stage in jetés, splits and various other airborn tricks, as if the wind has intensified, blowing leaves to and fro. Sevagin has a keen sensitivity to music and is able to render the notes as well as the melody through steps. But his choreographic lexicon doesn’t imitate leading choreographers as is the trend by most young creators. He doesn’t replicate Forsythe or Ratmansky; his step combinations combine the influence of classical training with unique insight into what works visually, in this case a modern, innovative dance “language”. There are a handful of new choreographic talents in Russia worth watching, and Sevagin is now top of the list. 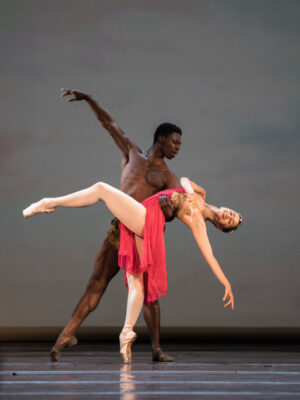 The rest of the program included divertissements from mostly classical works. Natalia Somova danced the bedroom pas de deux from Manon with fluid elegance alongside Matthew Golding from the Netherlands. Their tender passion was palpable, and her deliciously arched feet implied all the sensuality of the tragic heroine. Oksana Kardash proved her mastery in the most modern movement in Edward Klug’s Radio and Juliet alongside Ivan Mikhalyov’s sexy presence, although the meaning of the piece remained elusive. International superstar Diana Vishneva joined Dmitry Sobolevsky in John Neumeier’s dark duet from the ballet Tatiana. Void of pointe shoes and tutus, Vishneva appeared barefoot in a slip dress, while Sobolevsky continuously attempted to entrap her for caresses that she managed to repeatedly evade. The work focuses more on acting and drama than dance per se, and posed questions about the psychological implications of violent relationships.

The Stanislavsky’s Maria Beck led a saucy Fandango from Don Quixote alongside Evgeny Zhukov, but one wanted to see her in something more classical, or even in her signature role as Mistress of the Copper Mountain. Hopefully next season we will witness her in more leading roles.

Anastasia Limenko joined Brooklyn Mack, on invitation from the United States, in the pas de deux from Esmeralda. Mack, who just completed a guest appearance with American Ballet Theatre, excels at airborne pyrotechnics, and his charming energy easily won over the audience.

Kesnia Shevtsova’s exquisite legs, on display in the revealing costume for Carmen, evoked all of the sex appeal of the heroine alongside Mikele Satriano, guesting for the evening from Italy.

An excerpt from Hilaire’s version of Paquita closed out the evening, where the corps de ballet proved to be the true stars with tightly rehearsed line formations. The Stanislavsky may have a less ornate hall than the Bolshoi, but evenings like this show that they can outshine the rest of Moscow given the expert leadership of Hilaire, the solid talent in their ranks, and a full repertoire spanning modern to classical. We eagerly await the start of their 101st season this fall, with curious anticipation about the treats it may bring.