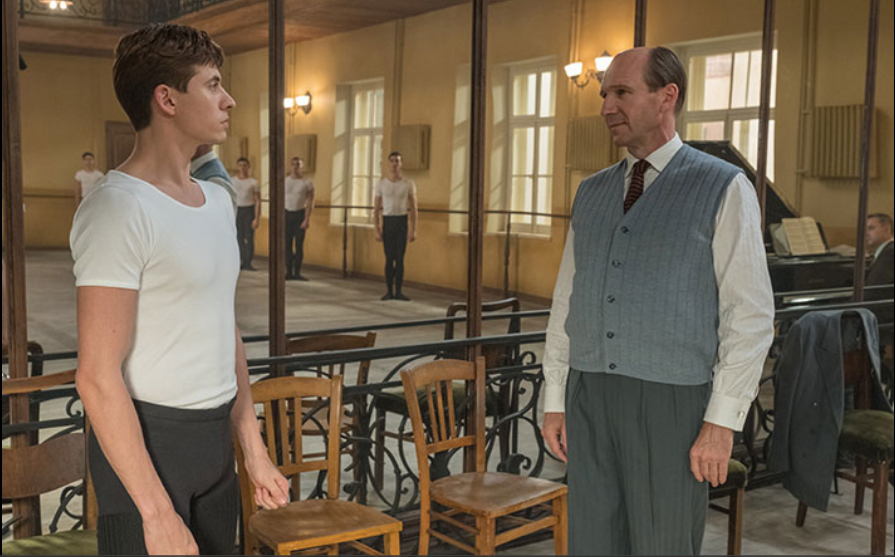 Having read at least 7 biographies on Rudolf Nureyev, VaganovaToday was interested to see White Crow, the film based on Judy Kavanaugh’s book which premiered this past weekend in Moscow. Academy Award nominee Ralph Fiennes produced and starred in White Crow, which also includes international ballet freelancer Sergey Polunin, among others.

White Crow open with images of Nureyev’s mother giving birth on a cross-country train and adheres heavily to the details in Kavanaugh’s book – at least up until Nureyev’s defection in Paris. That’s where the film ends, which means two hours are spent focusing on the first 20 years of his life with lots of clips of Kharkov-born actor/dancer Oleg Ivenko “rehearsing” in the studio or performing. Given Nureyev’s place on the world stage, attempting a film using footage of present-day actors is a tall undertaking, especially considering the presence of archival material that could have been interspersed in order to provide less knowledgeable viewers with a better idea of the subject matter. But doing so would have highlighted the stark contrast between Ivenko’s appearance and Nureyev’s, not to mention the difference in their dancing levels.

Yet Fiennes does an excellent job of portraying Nureyev’s personality as well as the psychological and social atmosphere of the Soviet era. While leaving the airport in Paris for their hotel, the Kirov dancers return their passports to the troupe’s overseers after going through passport control; KGB escorts constantly record the dancers entering and exiting the hotel in logbooks. A key scene at a post-premiere reception at the Opera Garnier features Parisians on one end of the room with the Soviets on the other, each eyeing the other with confused trepidation. The control and repression of the time comes through in the details. Yet, while culturally the two countries had much in common in balletic terms, the largest contrast comes in untamed Rudolph’s ongoing scandalous behaviour, depicted in the classroom, in the tour group, and even in local Parisian restaurants. As such, it would be pertinent for audiences to recall that Nureyev was not born in a cosmopolitan cultural capital such as Leningrad or Moscow. He came from a rural family in Ufa, the center of Bashkirian life, and retained those “peasant” traits throughout his life.

Not surprisingly, the portion of the film that suffers most, perhaps, is the dancing, if only because recreating Nureyev’s dancing on screen is impossible. Ballet films tend to fall flat on global terms, presumably for the sole reason that filming ballet is never the same as viewing it live. Several famous films come to mind: The Turning Point, White Nights, Center Stage, Black Swan. (While Baryshnikov impressed in the first two, the camera angles cut in and interrupted the movement; in Black Swan, Natalie Portman did not “dance”, the full-body shots were done by a professional). So, except for some stellar moments (limited to seconds on screen) of Polunin’s Yuri Soloviev rehearsing Danila from The Stone Flower —a role few Westerners will recognize, since the production is never shown outside of Russia– the film would have done better to either use black and white clips for the dancing scenes, or perhaps limit them altogether.

The film best presents famous pedagogue Alexander Pushkin, played by Fiennes himself, with whom not only Nureyev, but Baryshnikov and others also trained. Fiennes portrays him as a cultured, soft-spoken, polite man, dressed impeccably in modest slacks and shiny shoes even in the studio. (In this he recalls the teachers from that Soviet epoch — today, perhaps the only one left who adheres to that gentlemanly style is Mikhail Messerer, who still teaches class in a pressed white shirt and black slacks.) While Baryshnikov himself had commented that the portrayal of Pushkin missed the mark, Fiennes must be lauded for the extensive research he put into the film, as well as his own mastery of the Russian language that surely came with no small effort.

One of the overriding messages in Crow is that determination pays off. The untamed Nureyev can only take so much silence from his coach Pushkin before stopping him in the studio and demanding feedback. “You will know when I approve of you”, Pushkin replies calmly, and urges Nureyev to seek the meaning between the steps, explaining that technique, simple execution of the movement alone, is not enough. Yet while Nureyev’s elevated self-opinion is present from start to finish, during his life, he famously stated that he himself was not the best dancer in the troupe — Yuri Soloviev was. This acknowledgment, overlooked by nearly all Western critics, is a key statement about the Kirov Ballet’s level of dancing in the 1960s. Nureyev was never a strong technician — others, inicluding Soloviev, were stronger than him in that respect. But he had one thing they didn’t have: the ability to self-market, to use scandal as a means of promotion in order to ride the wave of society’s attention, and an enigmatic energy that drew the world’s notice. Classical ballet purists may be put off by his pre-Instagram mass following; non-purists will laud him for overcoming barriers and attracting the global audience and extreme wealth that he accumulated in his lifetime. (Apartments in New York, Paris, and even his own island formed part of a fortune estimated at $33 million worldwide at his death). One thing is certain: the contention, scandal and legend that Rudolf Nureyev created during his lifetime all live on in numerous ways. And that says something about who this man was.