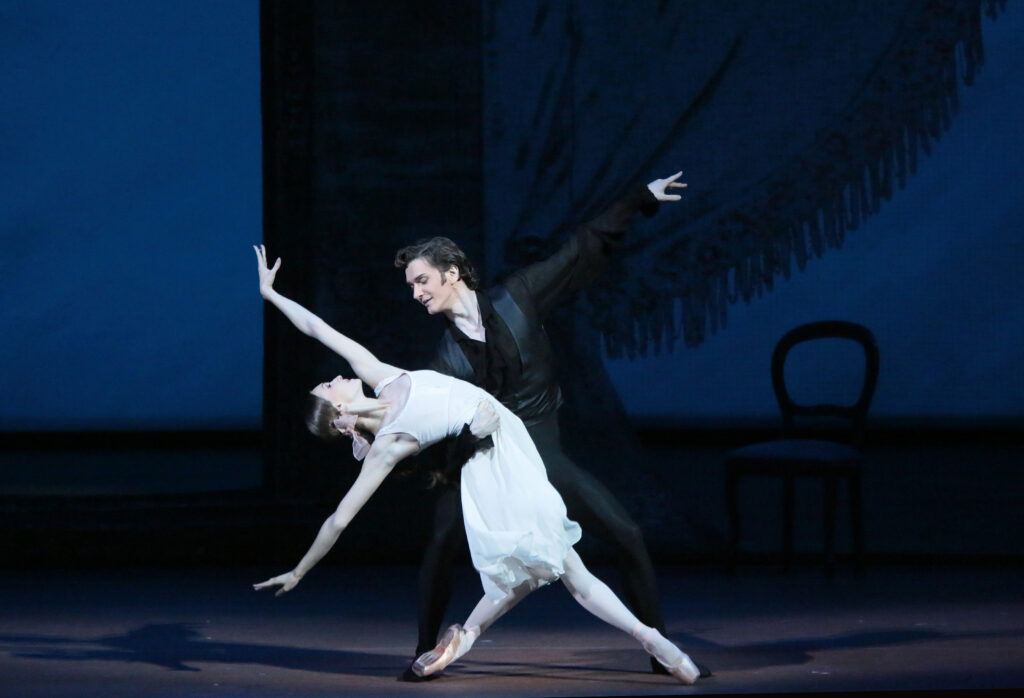 In an ode to Russian literary classics, the Bolshoi presented a short marathon of four performances of John Cranko’s Evgeny Onegin in early October. Ekaterina Krysanova and Vladislav Lantratov danced the leading roles in the second of four performances, with Anastashia Stashkevich and Semyon Chudin as Olga and Lensky, respectively.

Cranko’s work is a genius depiction of the Russian poem-novel in visual, stage form. At the first curtain we view this Russian family on the lawn behind their countryside home, Olga preening in front of the mirror, and Tatiana quietly consumed in a book. The choreography expertly highlights the personality difference between the two sisters: Olga’s jubilant cheer, hopping around between the various ladies, and Tatiana’s dreamy and withdrawn nature. Stashkevich ebullience seemed endless as she teased Krysanova, stealing the book out of her hands. In turn, Krysanova’s calm pensiveness suggested an other-worldly girl, lost in her own thoughts.

The entrance, first of Lensky, then of Onegin, pull the action forward. As Lensky, Semyon Chudin appeared a specialist in adagio turns. His chiseled legs etched every position ideally on stage, and he was clearly smitten from the outset with Stashkevich’s Olga. Chudin’s simple demeanor in this role suggest an honest man intent on proving his love to Olga.

When Onegin enters upstage, conspicuous in black, his imposing, nearly cold-blooded presence contrasts with the pastel-ridden stage scene. Lantratov has mastered this entrance with haughty glances from under his brow that imply none of the country folk on stage are worthy of his time. Even in the attempted duet with Tatiana, after lifting her chin to glance at her face, he suddenly leaves, distracted. She may take the small gesture as a sign of interest; we the audience see it for the disinterest that it is.

The aloof, bored, perhaps unevolved character of Evgeny Onegin proves an elusive man to characterize onstage or even in writing. One can analyse his reasons for returning to Tatiana at the end of the poem (or in this case, ballet), endlessly: after years of loneliness or perhaps years of light flings, he realizes she is the only one who ever truly loved him. Or, being the cad that he is, he hasn’t evolved at all and still enjoys the challenge of toying with a woman now married to a general: he may be in love with the game and the chase more than the actual woman. But the latter interpretation doesn’t hold weight in literary circles or on stage.

When Vladislav Lantratov danced the role, there was not a drop of playboy in the last scene of the ballet. His expressions of sincere regret accompanied kisses to Krysanova’s hands and repeat attempts to embrace her. In this complex pas de deux, the series of sweeping lifts underscored Lantratov’s strength as a partner, as each one of them appeared done with ease despite the athletic challenge that they pose.

As the music swelled, we witnessed the soulful inner struggle of Krysanova’s Tatiana, torn between the unquestionable loyalty she innately held for her husband, and the desire to fall into Onegin’s arms at long last. At one point in the duet, while staring straight ahead, her left arm nevertheless reaches out for Onegin, a metaphor for the tug-of-war between body and mind. She later gives in, kisses him, and the two seemingly dance as one together. But Krysanova, her face revealing the torture in her heart, rips up the letter and shoves it in his hands, just as he did to her years ago, asking him to leave, her face nearly broken in tears. The moment is dramatic, and speaks not only to the willpower of a loyal woman, but to the frivolity of the set of humans who walk through life without values or suffering. After the pain he has caused Tatiana, one wonders if Onegin, after the novel closes, has learned anything at all. Alexander Pushkin left that question open to conjecture, but with Tatiana’s dismissal of Onegin, we have also the dismissal of the notion of a romantic star-crossed pair. Duty and commitment reign at the end of the libretto, despite the momentary pain that those responsibilities entail.