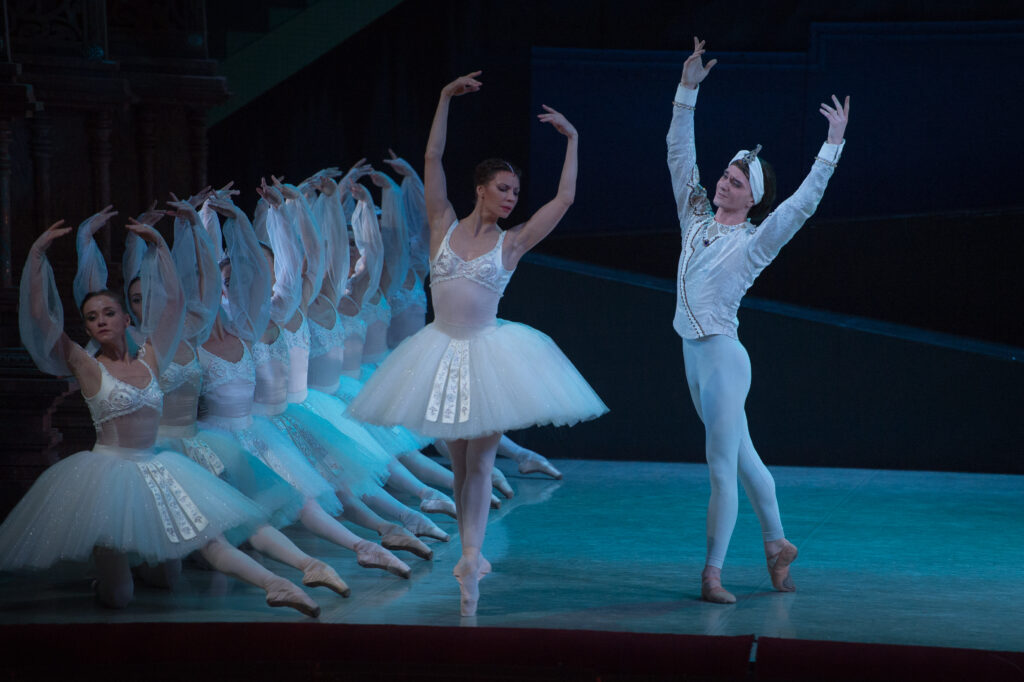 On 14 December, an historical event took place in the city of Perm, Russia, deep in the Ural mountain region. The Perm State Opera and Ballet Theatre, known for its adherence to classical traditions, premiered the ballet La Bayadere for the first time in its history. The grand-scale, luxurious production is the brainchild of head balletmaster and renowned choreographer Alexei Miroshnichenko, who devoted endless resources and energy to ensuring the project came to fruition.

“Petipa is the golden basis of our repertoire”, Miroshnichenko announced prior to the premiere. It then follows logically that this key white ballet should, after decades, finally find its place in the Perm Ballet’s permanent repertoire.

The path to the premiere was not without its own challenges, however: with less than a month to the premiere, Miroshnichenko was told the ballet would be cancelled due to budgetary constraints. Not one to accept defeat, Miroschnichenko, fueled with passion for his work and for the Perm troupe, searched for external financing to continue the ballet, and delved into the Ballet Fund he created in order to make ends meet. Adjustments were made to costumes and sets up until curtain time, calling upon local supporters for additional help, but the final result was an utter triumph: one of the richest, most polished renditions of this classical warhorse on any international stage.

Miroschnichenko managed to cull an all-star cast for the premiere, including Bolshoi stars Vladislav Lantratov, Maria Alexandrova, and (now with the Royal Ballet) Natalia Osipova in the three main roles. Against the backdrop of the finely tuned Perm corps de ballet, the production offered the highest levels of professionalism. Spending just a few days in the Perm studios and backstage, one thing became quickly clear: the warm, supportive working atmosphere in this theatre is focused on cooperation and the final product, not seeped in the cat-like politics that are now signatures of Moscow’s Bolshoi.

As of to demonstrate what’s possible in a fully creative atmosphere, on opening night, three Moscow-trained dancers appeared in the leading roles. Maria Alexandrova, now on contract with the Bolshoi and guesting internationally, danced a noble yet vain Gamzatti to Osipova’s emotive, lyrical Nikiya and Vladislav Lantratov’s stately and polished Solor. When Alexandrova’s Gamzatti appears in Act 2, bedecked in jewels and admiring herself in the mirror, the character’s essence becomes immediately apparent. She danced a guileful Gamzatti intent at keeping Solor to herself. Osipova’s Nikiya, sinuous and innocent, provided a stark contrast to Gamzatti’s jealous revenge. Osipova still has an incredible jump, and managed to make Nikiya a soulful girl destroyed by Solor’s betrayal. The performance of this trio impressed almost as much as the third night casting, in which Alexandrova danced Nikiya with expressive depth, sealing a love-based stage partnership with Lantratov’s Solor, a duet that revealed the extent of the couple’s artistry in classical works. 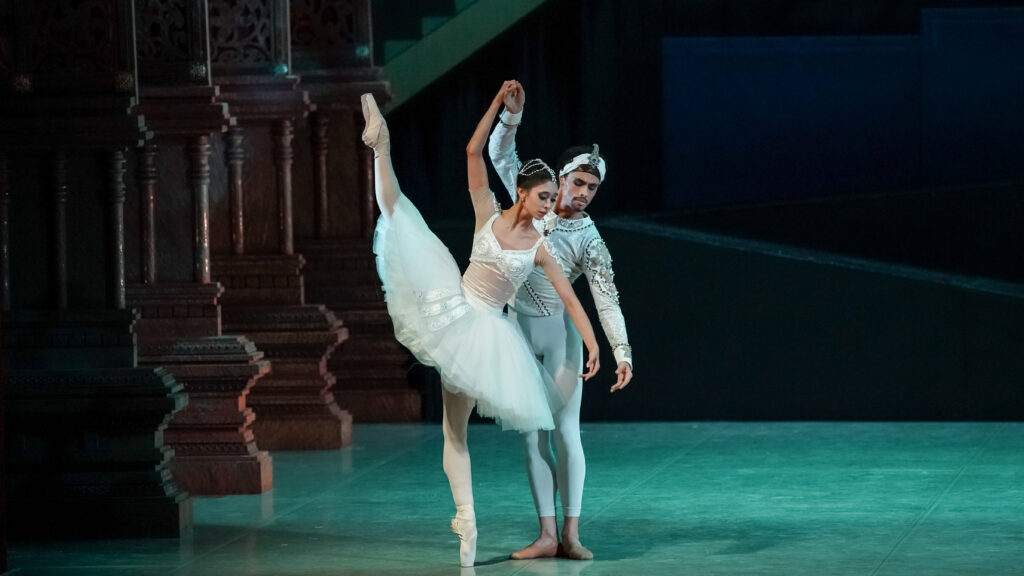 The second night, a talented local Perm ballerina, Polina Buldakova, performed Nikiya. Blessed with a long neck, lovely épaulement and strongly arched feet, she offered a romantic, softly fluid version of Nikiya. She fanned the fire carefully in Act I with delicacy rather than zest, sustained her arabesques en pointe as if in eager anticipation, and displayed fresh joy at seeing Solor in Act I. That smoothness shifted into a sprightly basket dance in Act 2 and polished classicism in the Act 3 pas de deux, highlighted by academically square arabesques and pure lines throughout.

Her Solor was Gabriel Lopes, a newcomer from Brazil who proved to be a strong partner with clear pantomime and a solid jumper. His Act 3 split jetés were done with urgency and attack. Bulgan Rentsendorj danced the egotistical, cunning Gamzatti, slightly stronger in her initial pantomime sequence than some of the duet moments, although the variation become her forté, where she hung aloft in the piqué attitude pirouettes.

Manu, performed by Lyaisan Gizatullina during this second night, danced a delicate and quaint water bearer alongside two students from the Perm Choreographic Academy, Olga Dronina and Vernokia Lobanova. The Golden Idol, danced by Taras Tovstiuk, provided sharp poses, accentuated by a flexible back and plenty of ballon in his jumps.

The Perm Ballet is most known for the remnants of the classical methodology brought to it during the evacuation of Leningrad’s Choreographic Academy (now the Vaganova Academy) to Perm during World War II. Many who arrived in Perm then continued to train and perform there for years after the war ended. Today, that history translates to the preservation of the tenets of Vaganova style both in this company and at their local school. As a result, the Perm corps de ballet in particular approaches faultless synchronicity in nearly every scene, whether it’s the eight women around the fire in Act I, the parrot girls in Act 2, or the shades in Act 3. Even major metropolitan companies are challenged when attempting to achieve this level of unison. 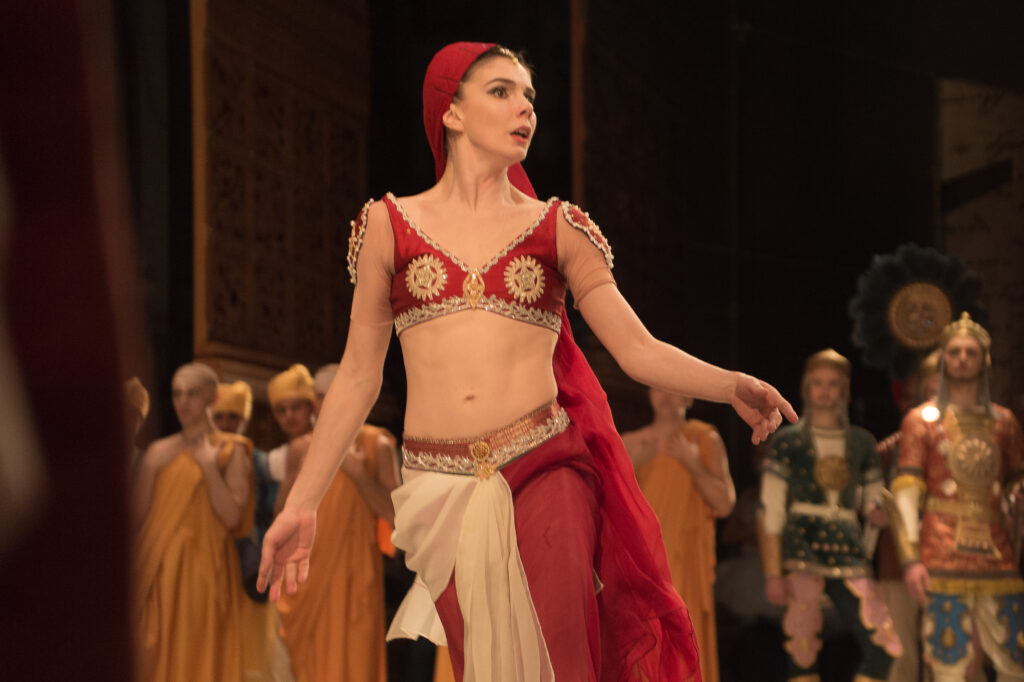 As the three Shades in Act 3, Anna Terentieva danced the slow sissone écarté variation with lovely control; she copes well with adagio. Olga Zavgorodnyaya danced the second shade with flowing épaulement and easy expression. The first shade, danced by Lyuana Gondim, displayed strength in the hops in arabesque.

Choreographically, the steps in this production differ only minutely from those in the Mariinsky version. The challenging Act 1 jampara is identical to the original, with the ladies expertly attentive to the musicality and head positions in this native dance. The troupe takes the Shades’ entrance at a faster tempo, and performs a tendu, then –in one count– plié in arabesque as they raise the leg. Their thick knee-length tutus, based on the historical designs, create a lovely romantic image. 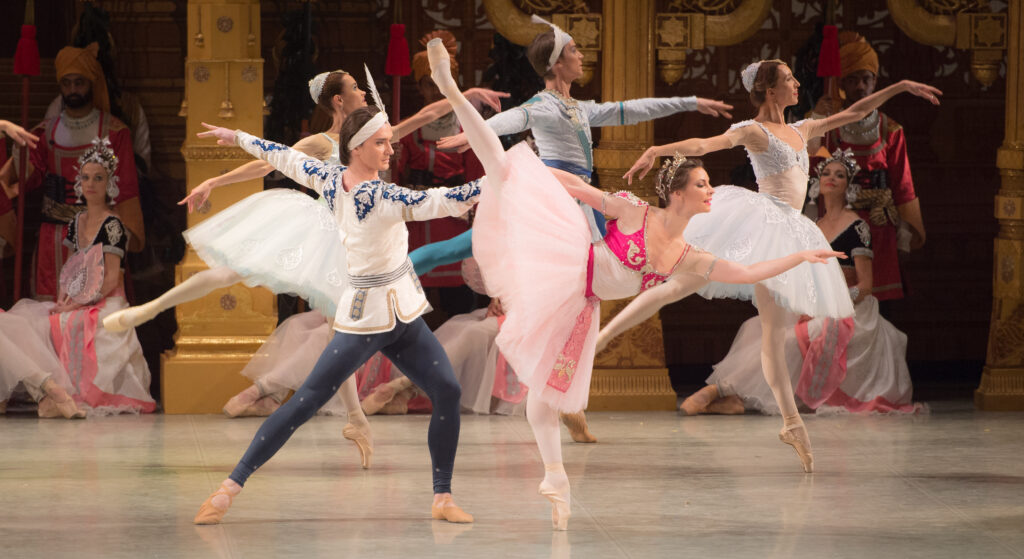 On the third night, when Alexandrova reprised the role of Nikiya alongside Lantratov’s Solor, we witnessed a signature moment in this couple’s onstage partnership. After viewing Alexandrova as Gamzatti, it would be natural to picture her exclusively in this role. But her Nikiya reveals a softness and poignancy that, if uncharacteristic, is in fact even more impressive. Nuance in the pantomime sections make her stance clear: her hand shakes uncontrollably in Act I as she drops the knife, realizing what she might have done. In Act 2, Alexandrova covers her mouth in shock, throwing her head back in agony when Solor kisses Gamzatti’s hand. Lantratov’s acting skills matched hers: he demonstrated equal distress at losing her at the end of Act 2, grabbing her limp body just seconds after it has fallen to the floor and crying out in grief. His despair is just as palpable in his Act 3 entrance, where he races to the opium lunge, his proverbial death bed, a calling to join Nikiya in the afterlife. These two artists imparted their duet with a deeper meaning that only those who have loved and lost can truly feel. To witness their performance is to experience an ethereal magic that extends far beyond just simple choreography and costumes. The Lantratov-Alexandrova pair are in fact an inseparable whole, whether onstage or off, and they will go down in history as an historical ballet partnership.

An equal if not greater pleasure was the Perm orchestra at the hands of local conductor Artyom Abashev for all three performances, which sounded ideal and far above Moscow’s routine orchestras. From the overture played with gusto to musical pauses at key moments, it is clear that these professionals take pride in their work.

Every aspect of this Bayadère –Abashev’s attentive conducting, the choreographic nuance offered by the dancers themselves, Miroshnichenko, the Moscow stars, and the entire staff of the Perm troupe– revealed the highest level of professionalism, and all are to be commended for this milestone achievement. One can only hope they will tour this stunning production to other cities soon. 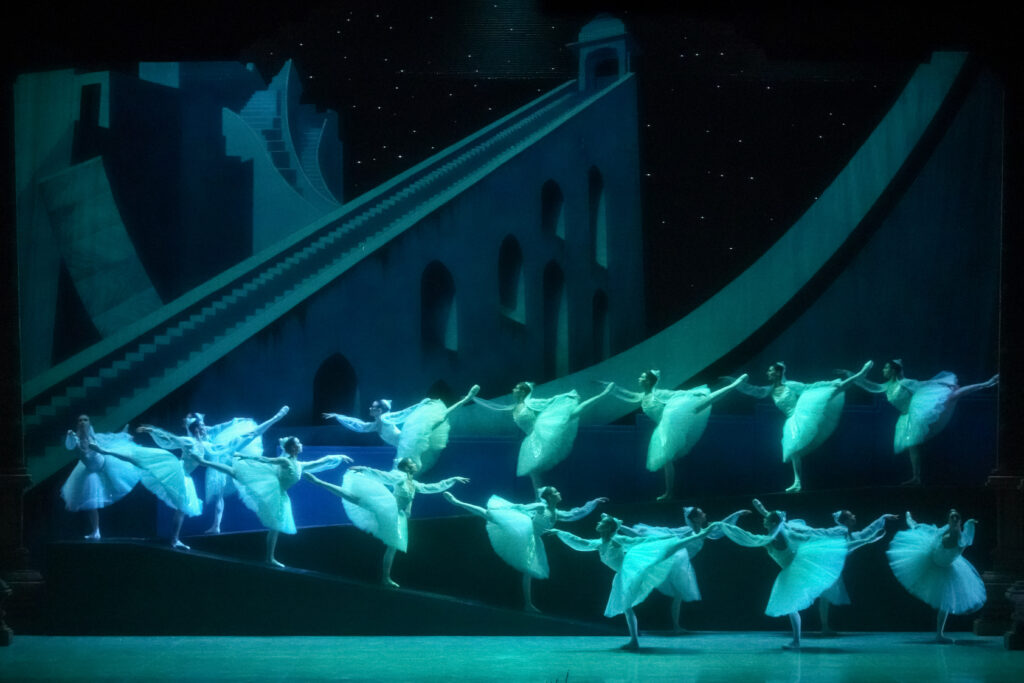