You graduated in 2011 from the Vaganova Academy under Ludmila Kovaleva, a pedagogue who has trained some of the biggest names in ballet, including Diana Vishneva. What was it like working with her?

I really love and respect Ludmila Valentinovna and am very thankful to her for all the knowledge and skills that she gave me. Even now, it is very interesting for me to work with her, not only on technique, but also on my roles. She has an uncanny ability to connect technical elements to the meaning of a ballet role, so that these elements become inseparable from the character and you no longer need to worry about them when you perform them, they just come to you naturally.

One interesting note about Ludmila Valentinovna teaching is that she comes up with movement combinations right during the class, without preparing them in advance at home like many other ballet teachers do, and so her class is always integral, proper and exhilarating. I do not know how she does it with such ease! Her rehearsals always inspire me and fill me with the desire to continue to perfect myself, reach new horizons in my profession, and see the main goals on my journey with greater clarity. Perhaps it is because Ludmila Valentinovna knows how to grab your interest by making simple steps in a variation come alive, making it nuanced and colourful.

Do you still manage to work with her?
Every chance I get to work with her greatly enrichens me, and I wish these instances would happen more often. Unfortunately, living in different cities, and with the busy schedule at the Bolshoi, these opportunities are very few and far between. I get to rehearse with her when I guest with the Mariinsky Ballet in Saint Petersburg, I also managed to work with her several times at the Academy when I travelled to see her and get her guidance in preparing for an important role.

You joined the Bolshoi right after graduation. What was that shift like for you?
The main difference was that at school you have teachers who look after you and you can follow their decisions. It’s not that you can give up all responsibility for your own development and studies, but at the theatre you’re really left to your own devices. It is up to you to devise your goals for the season and agree on them with your artistic director, coordinate and plan your rehearsal times, arrange for your pedagogue and your partner to attend your rehearsals, while managing your workload and leading a healthy and balanced lifestyle, so as to be able to get through an entire season without burning out or getting injured. In my first season, I basically had to learn about living as a self-sufficient adult in a matter of weeks! 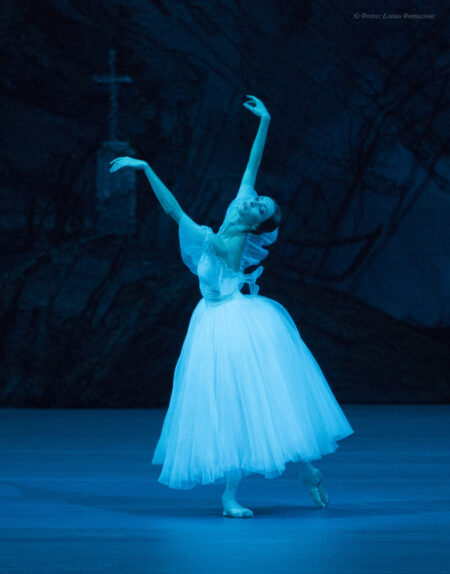 Is it hard working in such a large troupe?
It goes without saying that I’m very proud to be a Bolshoi Theatre prima ballerina. It’s a very special feeling to dance on its world-famous stage. I feel it’s great that the theatre can afford to mount large-scale classical productions, involving large numbers of soloists and corps dancers, and that we are so conscientious about preserving our classical heritage. While maintaining my classical repertoire, I also have opportunities to take part in new creations and modern works, and to work directly with the greatest choreographers of our time: John Neumeier, Jean-Christoph Maillot, Pierre Lacotte, Yury Grigorovich, Yury Possokhov, as well as with the tutors of the Balanchine and the Cranko trusts, for example. Having such a diverse repertoire enrichens me, and allows me to develop and experiment right within the walls of my theatre.

What is the hardest part of your job?
Apart from having to overcome the daily rigors of physical exertion, we as ballet artists also have to tackle psychological challenges. One of the most difficult moments during the seven years of my career at the theatre was my injury that made me miss almost an entire season. It was difficult not so much because of the surgery and the recovery process that I had to undergo, but more because of the psychological hardship of being forced to essentially do nothing and wait, since I could not apply the usual physical pressure on my body. At the same time, because of these limitations I was introduced to Pilates, which is not very familiar to ballet dancers in Russia and not often used to recuperate from an injury or from physical strain. Pilates really helped me to first maintain my muscle tone while I was healing, and then to rehabilitate and regain my form after the surgery. I believe that Pilates should be taught already at school, so that dancers can form a robust and proper muscle and ligaments structure, which would help them have a longer career without too many injuries. 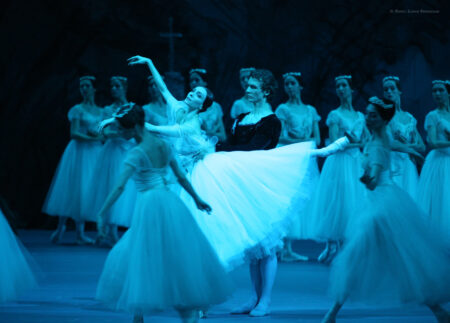 What’s the best part of your job?
The best part of my profession is creating my heroines, being very different and experiencing different situations on stage, being an actress who lives through the lives of her characters, and trying to surprise myself with an uncharacteristic role or interpretation. Honestly, because I like transforming myself so much, I prefer dancing in full-length story ballets, involving complex characters and character development. It’s also very interesting to dance in technically intricate ballets, as in, for example, Pierre Lacotte’s La Fille du Pharaon, which has a great deal of dancing and a relatively straightforward plot, so the main accent there is on the choreography and technique.

You’re a native of Saint Petersburg, but now in Moscow, how do you like the city?
Moscow continues to grow in on me, even though its energy and its people are very different compared to Saint Petersburg. My family is here, and I cannot imagine my life without Moscow or the Bolshoi Theatre, there are so many things that connect me to Moscow right now. But those who were born and raised in Saint Petersburg carry their unwavering love for that city throughout their entire lives, and I never forget where I have come from, keeping a spiritual and aesthetic connection to my birthplace at all times, including when I am dancing classical ballets.

What is your favorite role?
My favorite role is always the one that I am preparing for at any given time, but I love all roles where there is a dramatic content, where there is a story and character development. I would note Anna Karenina in John Neumeier’s ballet where I premiered this season, Tatiana in Onegin, Marguerite from Lady of the Camellias, and also roles from the classical repertoire – Giselle, Nikiya from La Bayadère – you can probably list them all.

What role you would like to dance?
The next role I would like to dance is Aegina in Spartacus by Yuri Grigorovich. I started preparing for it some time ago, even read the Raffaello Giovagnoli book on which this ballet is loosely based and watched the Stanley Kubrick film with which it shares a lot of ideas, but had to take a break due to my busy schedule. I hope to return to this role in the upcoming season. 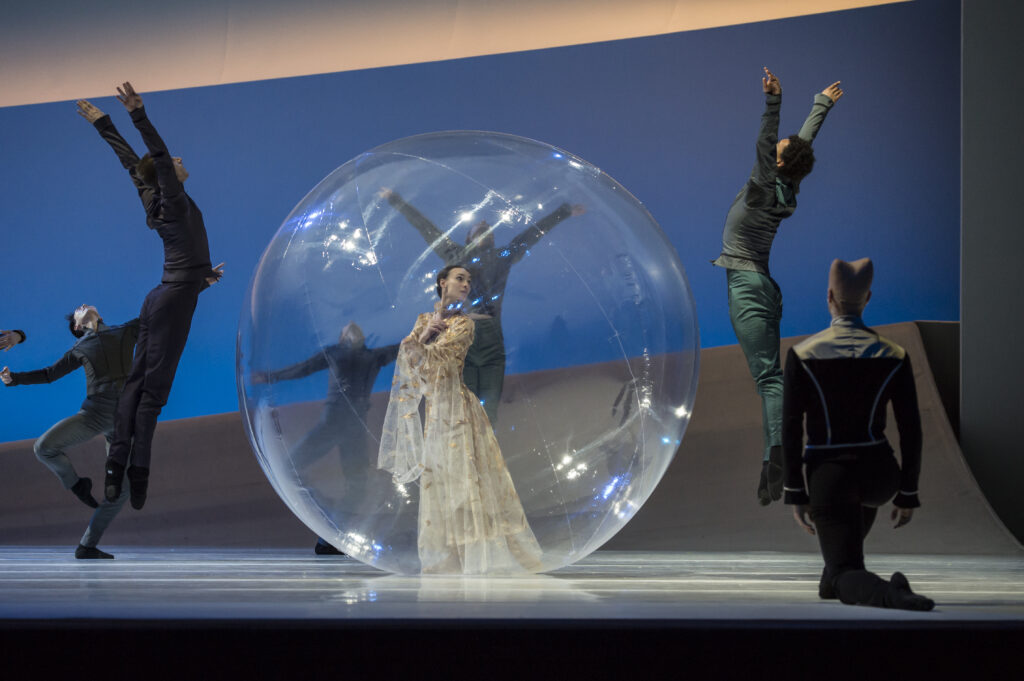 Your husband is theatrical but not a ballet person. Does that help having different professions?
My family is not from the ballet world. It actually helps, because I can count on getting independent fresh viewpoints from them, and I get to experience the world outside of the ballet circles.

Do you cook?
With my schedule, it is very hard to find time for cooking. I enjoy baking sweets, but need to be conscious of maintaining a healthy lifestyle and diet. I also like to experiment with preparing dishes from various parts of the world: Italian, Spanish, Mexican, Thai, Uzbek.

You do travel a lot. Do you have any guest performances planned?
Yes, my international performance schedule has been very active, with more and more guesting engagements around the world. I guested at the invitation of Manuel Legris at the Vienna State Opera Ballet, performing Swan Lake and then Giselle with Semyon Chudin, and more recently taking part in the Nureyev Gala there. We are due to repeat Giselle in Vienna this coming autumn, so I am very happy that the Viennese audiences received us so well and am looking forward to developing this role even further for the next performance. I also recently guested with John Neumeier’s ballet company in Hamburg, which was incredible because I love to work with John so much. I performed Marguerite in Lady of the Camellias, helping introduce one of John’s most talented young dancers, Christopher Evans, to the role of Armand; shortly after that he was promoted to principal. I then returned to Hamburg to appear in the Nijinskiy Gala with Artem Ovcharenko and Semyon Chudin from the Bolshoi Theatre.

We frequently collaborate with Jean-Christophe Maillot, and I always look forward to dancing in his works. I spent two winters in a row with his ballet company in Monaco, performing in his ballets Casse-Noisette Compagnie and La Belle [ed: version of Sleeping Beauty]. Then, last year I performed La Belle again on the stage of the Bolshoi Theatre with his company when he brought it to Moscow. His version of Romeo and Juliet is something that is very close to my heart, and I dream of dancing in it someday.

I also tour a lot with the Bolshoi. Last May I danced Swan Lake in Korea, a really wonderful and comfortable country, and this coming September I will appear on the company’s tour at La Scala in Milan.

What are your dreams for the future?
To be honest, while I am generally a responsible person who likes to plan ahead and set clear goals for herself, over time I have also learned to enjoy the moment, to cherish what I have today and the memories that it will bring to me later. While I think about the new things I would like to do and the existing roles that I would like to perfect, and while my schedule for the upcoming several years is already getting filled very quickly, I also leave room for opportunities and ideas that will find me on their own, keeping an eye out for some unexpected, but exciting proposals or invitations.