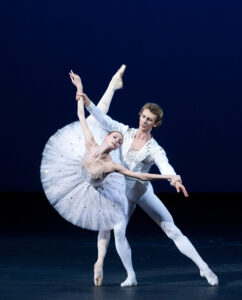 As the second set of soloists, Yanina Parienko displayed the signature New York City Ballet “spread finger” technique in her dancing with a keen sense of musicality in her sections. Her partner, David Motta Suarez, presented light jumps with ample ballon. The Emeralds corps de ballet etched the cross-theme patterns rampant in this section with accuracy.

The Bolshoi’s end to the Emeralds section differs choreographically than that performed at the Mariinsky. Here an additional section of three men and four women intertwine, fully void of the supporting corps de ballet, and dance in an almost Serenade-esque pattern to the music of “Death of Melisande”. This ending was added in 1977 by Balanchine after Violet Verdy’s retirement. The significance of this shift is unknown — the Bolshoi performs the complete version– but reflects the choreographer’s fuller rendition of the work.

Nina Kaptsova emitted snazzy heat as the lead in Rubies alongside Vyacheslav Lopatin, a lively couple that filled the Stravinsky score with an appropriate amount of ardor. Although Kaptsova eschewed the 180-degree battements devant in favor of more subtle extensions, the result fell somewhere in the area of tasteful flash. Lopatin, in the post-duet romp, turned a sudden bump into one of his four Ruby buddies into a playful moment of improvisation. If the oboes and flutes in the orchestra had difficulty at the outset of Rubies, this couple’s ability to entrance managed to distract from those rough spots. The second soloist, Yulia Grebenshikova, a tall brunette with endless limbs who somewhat resembles Irina Dvorovenko of ABT, attacked the challenging set of grand jetés with verve. The only thing missing was a sense, from the corps de ballet, of the counts for this section.

Few can compare to Uliana Lopatkina in Diamonds, but Olga Smirnova, a fellow Vaganova Academy graduate, is easily on a par with this classical ballerina. While Smirnova’s performance of the role differs in numerous aspects, her sense of regal reserve, Imperial bearing and unhurried confidence imbue her interpretation with majesty that is hard to find in other ballerinas. Less ceremonious than Lopatkina, she is nonetheless stately, and nearly no one in the company can match her physical beauty. She left mysterious moments in her wake: the arm gesture at the back of her head, the step-towards-but-bourrée-away from her partner, the swan-pose rélèvé: all hinted at a mystifying story wrapped in elegance. Semyon Chudin, incredibly impressive for his gymnastic-like physique as well as his emotional delivery, seemed enthralled with his partner every step of the way. The coupe-jetés that each delivered were razor sharp and space consuming, grand like diamonds that they are. In the final procession where corps members don long white gloves, an image of Russian imperialism filled the hall. These are the moments of bolshoi grandeur that one relishes most.