It was my mom’s idea to start me in ballet because when I was young she saw that I had some physique, talent and potential. When I was 4 years old, she took me once per week to ballet class. By age 6 I attended a studio with a Russian ballet teacher and studied with her from age 6 to age 12.

When did you know you wanted to become a professional?
I competed at YAGP when I was 12, and received a scholarship to the Kirov Academy of Ballet in Washington D.C., where I studied for 2 years. Both of my teachers there were Russian: Madam Liubov Fominich from Perm taught me the first year, and Marianna Lobanova was my teacher during the second year. My mom is close friends with her. During my first year there, I had a moment of hitting rock bottom during that transition age from preteen to teen, when your body is changing and character is developing. It was, “you need to get yourself together or you’re done.” My mother and my teachers had a talk with me and asked if I really wanted to continue dancing.

And at the end of those 2 years at the Kirov Academy, I attended the Bolshoi Academy summer program in New York City for 6 weeks. The Bolshoi Academy brings their teachers and some of their male students for partnering in that program. I really wanted to go to Moscow. They recommended me and accepted me into the Moscow State Academy of Choreograpy (commonly known as the “Bolshoi School”). 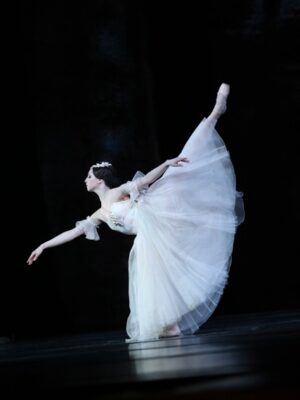 I have dual citizenship, but they took me as an international student which was easier on their end, because there were no more spots for Russians. I joined the classes in October after receiving my visa. I flew in, and the next day I went to the class led by the director, Marina Leonova, so she could watch me. That year she was going to teach one level (course) and another teacher was teaching the second class, so I was going to be taught by one of them, it was just a question of which one. The floor was raked, I was jet-lagged. After class I went to the office in the international section and the assistant said “Marina Konstantinova (Leonova) is going to take you.” I studied in her class for 3 years, the first, second, and third “course” as it is called here, the final 3 years of study.

Basically at that time, they didn’t accept internationals to the Stanislavsky, but Zelensky said if you have a Russian passport we can take you. 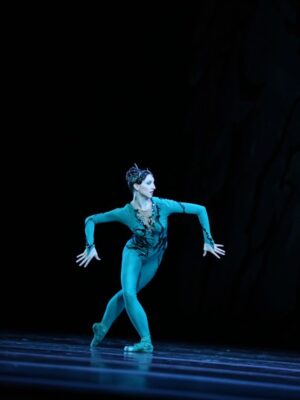 When did you first come to Russia?
After I was born in the US, I came to visit Russia about 5 or 6 times. When I was really small until about age 7 or 8 I spoke Russian with my mother because I was with her a lot. But obviously when kids go to school they speak the language that is spoken there, so I started speaking English more after starting school in the US. I started answering my mom in English when she would speak to me in Russian and she would get upset. She tried to make me read and write in Russian, and I’m so thankful for that now.

Was the adaptation to life in Russia at age 15 difficult?
I guess it was less difficult than for those nationals who come from Korea, Japan, England and do not speak the language at all. However, it was a challenge moving to another country, without my parents, and living in the dorms, and with the shock of knowing I’m in Russia in the Bolshoi Academy, in these studios where amazing, famous dancers have danced and taught.

And what about the transition from school to theatre?
Any transition is difficult, but what was hard is that I had to live 6 months in the Academy dorms because the theatre didn’t have an apartment for me yet. And thankfully Leonova let me stay there for half a year. But one year when I returned to the dorms in January, one of the resident advisers told me, “Masha, you have to go collect your things, people need to stay here.” So in one day I had to collect my things and move out. But I stayed for a while with a friend while I looked for a place to live. The Stanislavsky found me an apartment and gave it to me, on Taganskaya, and I’ve been there for 5 years.

The other challenge was that I didn’t know a lot of people in the theatre, a lot of my colleagues also joined the Stanislavsky, so thank God I knew them. But older members of the troupe would disapprove of the newcomers and that makes it difficult to integrate.

You also have to work really hard to prove yourself, so that the teachers do not think you are just someone from nowhere.

My first season started in September, and at the end of October I danced a variation in Don Quixote. My mother called me, exclaiming “Congratulations!” I asked her for what. She said, “Did you see the web site? You are a first soloist.” No one had told me, but I had been promoted to first soloist, above the corps and second soloist level. I was at that level for three years and at the end of my fourth season, when Laurent came, I found out from the site again that I was promoted to leading soloist. That was this year in March. 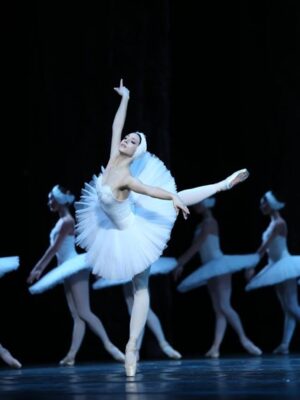 Do your parents come to visit?
My mom comes at least twice per year, especially if I have a new premiere or something. My dad comes less because he’s a bit older and it’s difficult for him to travel so he’s at home more. But I go home during the summer.

Do you have a favorite role?
I’ve danced quite a few roles but not as many as I’d like to yet. Of those I’ve danced, my favorite is my first leading role, the Mistress of the Copper Mountain in Stone Flower, Grigorovich’s ballet. Casting in that role occurred in an odd way. Andrey Uvarov came up to me and asked “So how is that ring jump of yours doing? Do you want to dance the green one?” When he said that, I understood what he meant and asked if he was serious, and I said yes. I started rehearsals and for four months the level of stress on my body was extremely high because there are so many jumps and it’s so physically demanding.

I also like the Street Dancer in Don Quixote, but we’re not dancing that again until next July.

Do you have a role you want to dance?
I’d like to dance all roles, because my emploi has a pretty wide range and I feel that I can dance different roles, so it’s interesting to try everything from Nikiya to Gamzatti, Kitri to Giselle. I’d love to dance Odette/Odile in Swan Lake. Hopefully I’ll get to dance Gamzatti this year. Kitri, but again that will be in July.

Do you do any cross-training?
I began Bikhram yoga and that is really good for stretching, balance and for your back. I have scoliosis and basically flat feet, I roll in badly and it really helps with stability. But last year I had so much work that I didn’t even try to go because I was too tired. I go to the gym and do the elliptical. Since I was 14 I have been doing Pilates, I do it myself, I don’t do it on the machines. I probably should do it on the machines, at but the things I was taught when I was younger work for me.

Do you have to watch your weight?
My diet is my lifestyle. For me, the most important thing is to not eat a lot, smaller portion. During the year when I’m on my schedule and in good shape, I try to eat sweets very rarely. If I eat them, it’s in the morning. I do not eat bread unless it’s whole wheat or rye. And I try not to eat at night. So if I have a performance and have a run-through that ends at 9 I will have something small and symbolic. My main meal is breakfast, because during the day I have rehearsals, so I snack on fruit or nuts.

How do you wind down after a performance?
After a performance, it depends on what it was, if it is Mistress then I eat, because it’s like a celebration. But usually after I perform, after my premiere I was in shock and the only thing I wanted to eat were mozzarella sticks. I had those and I couldn’t eat more, because I was so tired and shocked, I didn’t fall asleep until 3 in the morning due to the adrenaline. I take ZMA vitamins, they have zinc, magnesium, pyridoxine and melatonin. They help you relax your muscles and recover. I take it at night.

Do you have any hobbies?
When I was little I wanted to paint. When I have time, I attend master classes here. This summer I bought my own oil paints for the first time. I thought I would have time to use them in the USA but I didn’t, so I brought them back to Moscow and hope I can find time here.

My hobby is my boyfriend basically (smiles). We live together. He works in the theatre as a cellist and we’ve been together about 18 months now. Even though he is not a dancer, he’s an artist and we understand each other. I can talk with him nonstop and he helps me out if I’m going crazy he calms me down. We balance each other out.

What are you looking forward to this season?
In November we will have four new small ballets, in April we will perform a new program of 3 works, and in July we have the Nureyev Don Quixote. So there will always be something new during this season, we’re not just repeating the same repertoire.

What do you dislike about life in Russia?
Russia is a difficult country due to its history and I think it’s in the genes of Russians to be harsher, maybe more close-minded than other countries. When I returned from vacation in Italy this summer, I came into the airport and the faces were not smiling, and it was raining. Coming from Italy where everyone is nice and open…obviously it’s due to the climate and culture too. There is a word in Russian, surovie — stern and bleak. I mean, you really do not have to bump into me on purpose in the metro, you do not have to do that. The first week here you try to save yourself and think, “No I’m not going to be that person who does something back” but two months later it’s difficult to maintain.

But it’s fun to have a boyfriend who understands these challenges, his parents are from Spain, he grew up there so he has a different mentality and it’s fun to share our views on cultural differences.

What do you like about life in Russia?
I think if you ask anyone in Russia what ballet, opera or music is, they will at least know one professional artist in some category. I like the fact that people in Russia are very cultured and in Moscow there are so many theatres of all types, musical, dramatic, ballet. I feel the people here really appreciate the theatre. It’s my lifestyle, so that is important to me.