Touchbase One Year In: Laurent Hilaire at the Stanislavsky Ballet – July 2018 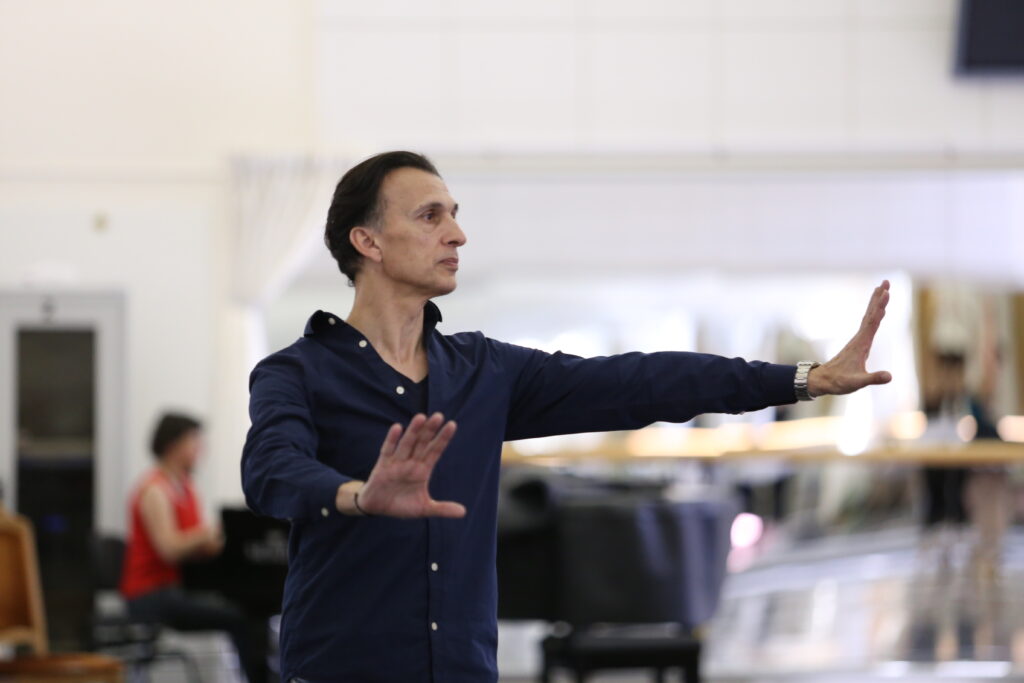 You’ve been at the helm of the Stanislavsky over a season now. Have you noticed changes in the dancers since you arrived?

Yes. There is a certain consciousness about work, in a way. I think the company pays attention to work and they have learned and grown, they’ve gained maturity, they’ve become aware of what I want in terms of the form of work. The basis of academicism is the same everywhere, so that is unchanged. You can make it come alive in various ways, but the quality of work itself, that is what I demand of them.

In Russia, we have an extremely large ballet public and the classical traditions. In Europe they are things that are at the same afraid of speed and i think we have to pay attention to that. The young generation of Instagram and Facebook has a need to be able to identify with the large classical ballets. So its truly the quality and the way you make these ballets come to life that will allow us to preserve those links between the repertoire and the public of tomorrow. 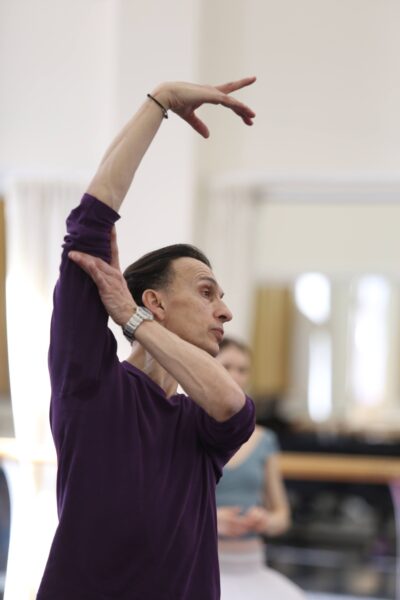 Some people were concerned about the upcoming repertoire given the new additions of contemporary works. Is there a risk that modern will overshadow the classics here?

I don’t like when people say “modern”. For me, modern means speaking about tomorrow. I prefer to refer to the new works we do as “contemporary” and that means “of today” These works involve talented choreographers who engage differently with different style and technique. My approach is to share this joy, this quality, and these various universes with the public and to the dancers.. When I arrived, there were some avant-garde works that the theatre was doing. I think we have atruly favorable position for promoting different experiences.

Do you experience competition with the Bolshoi for the public’s attention?

No not at all. Absolutely not, I’ve never thought that. I believe there is room for both companies. The Bolshoi is the Bolshoi. The Stanislavsky is the Stanislavsky and both should have their own identity. I love this theatre and I do work here which I hope is constructive. I attend performances often at the Bolshoi and I have great relationship with the director there, Makhar Vasiev. We don’t have the same repertoire or productions so – no.

What is the role of dramaturgy here?

It’s a very important aspect of the Stanislavsky. Now I’m rehearsing Manon, for example. And according to the case, there are two ways of approaching rehearsals. A dancer should know the choreography of course, and you can approach it technically, but there is also the meaning. What are you saying, why did the choreographer create these steps? You have to keep this idea of what the choreographer wanted to express. because I believe this is the way to make the choreography better. Through the work and the character, when you work on Giselle for example, she has certain steps for expressing things. You can’t assign a word to each step, of course, but there’s an idea she is expressing, and you must never forget that idea, because if you lose it then you are no longer speaking about dance or art, it becomes just movement. And it is necessary, it is an important challenge. This is why I just said how large classical ballets also in this dramaturgy and narration are a way to play and be involved – it is important it’s not just movements. It is important that a spectator who has never seen it can come in and understand what is happening. There is a code in pantomime, and this code should not be a prison, it should release a certain rigidity, and it has to be alive, in fact. And then it must to be theatrical, and alive in time and remain in adherence to the choreography and remain in the code of pantomime and we may adhere to this and the public may have the idea that the dancer is inventing as he or she is dancing on stage. And then we are at the Stanislavsky, so if we don’t do it here… 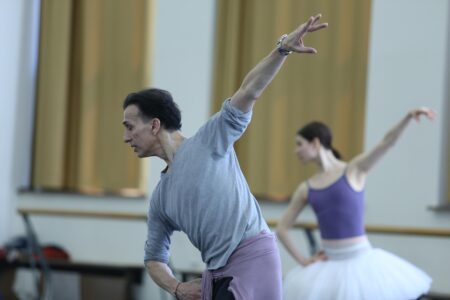 For me that’s very important, a crucially important component to our work.

You have dancers who need intuition and others who don’t. There are artists that you have to direct more and those who you can give more freedom. In either case, [the dramaturgy] is actor’s work.

As a metaphor: first you have to define the framework of the house. There are various rooms in a house: the kitchen, the living room, the dining room. You know they exist, and you go into a room, but you must stay within the framework of the house. In the same way, these large ballets are masterpieces. Giselle for example is a jewel in structure. So you must stay within this framework of course, but within that you have freedom. We will never have 2 Albrecht’s or 2 Giselles who are the same, and that’s what’s interesting. The dancers have the freedom to interpret the role differently, it depends on the personality of the dancer. But as part of my work with those who have experience and maturity, I’ve told them, “Take risks.” In fact, I think an artist should always first ask “why am I doing this?” I go into the studio and ask them in rehearsals, “Why are you doing this variation, what is it saying?” and they answer me, but sometimes hey don’t know. So you have to explain to them, and they need to know why they’re doing something. Sometimes it’s me, sometimes it’s the pedagogue who helps them. We have to make suggestions to the dancer and those suggestions must resonate in the dancer’s body and head. Only then will they find some key in how they translate the role. In fact, an artist is a transmitter and translator of a given role to the public.

And for me, I ask the dancers to invest themselves, to have more autonomy. Even if I see a poor direction, that enables us. Because there is a time later, when we can look at what is behind us and if it wasn’t good, we learn from our mistakes. The pedagogue and I are there to support the dancer. The dancer must take responsibility for their own creativity and interpretation. It is work that often depends on a dancer’s maturity and often on their history or intuition. We are not on stage to recite a text, we are on stage to enliven it. The dancer goes on stage and lives the role, incarnates it. So I tell them “Go, take risks. Put yourself in danger. Go discover something in yourself that you do not yet know. Do not be afraid, and I will support you.”

Even if I see a mistake on stage because they do too much, for me that’s not a problem. We can always correct it later. But if someone makes a mistake because they are not doing enough, for me, I don’t accept that. 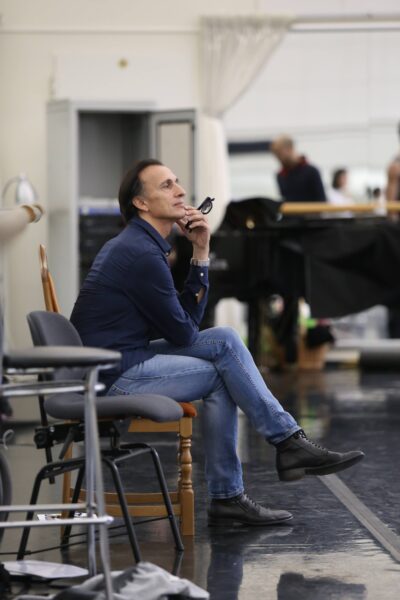 An artist is not just there to do their job. They are there to do more. An artist must go beyond himself or herself and take risks and go beyond the norm. We try to reach a perfection in this profession, but I don’t know if we will reach it.

A few times in your life you might perform and feel it was almost close to being perfect. But it’s not that way. Sometimes you think you danced well and other people are almost indifferent to the performance. Still other times maybe you think you danced poorly and others applaud you and say it was fantastic. So there are no rules. [smiles] But a dancer or artist must never economize, or compromise, there is that dialogue with their body which is their instrument. There is the violin –which is like the body– and the bow is like the head that leads the body… in the body you have, you must to ask more of it, because the “more” is possible. “More” is possible.

We work in academicism. An arabesque is an arabesque. The language, the style is important.

The writing of a movement is important too. For the public to be able to “read” a movement, it must be well written. In fact, you can write something down quickly in haste, and it’s not enjoyable to read. Or you can take time to do write it out beautifully, such as in calligraphy. Choreography, perhaps is like calligraphy…the approach is similar…

Photos by Sila Avvakum. Courtesy of the Stanislavsky.