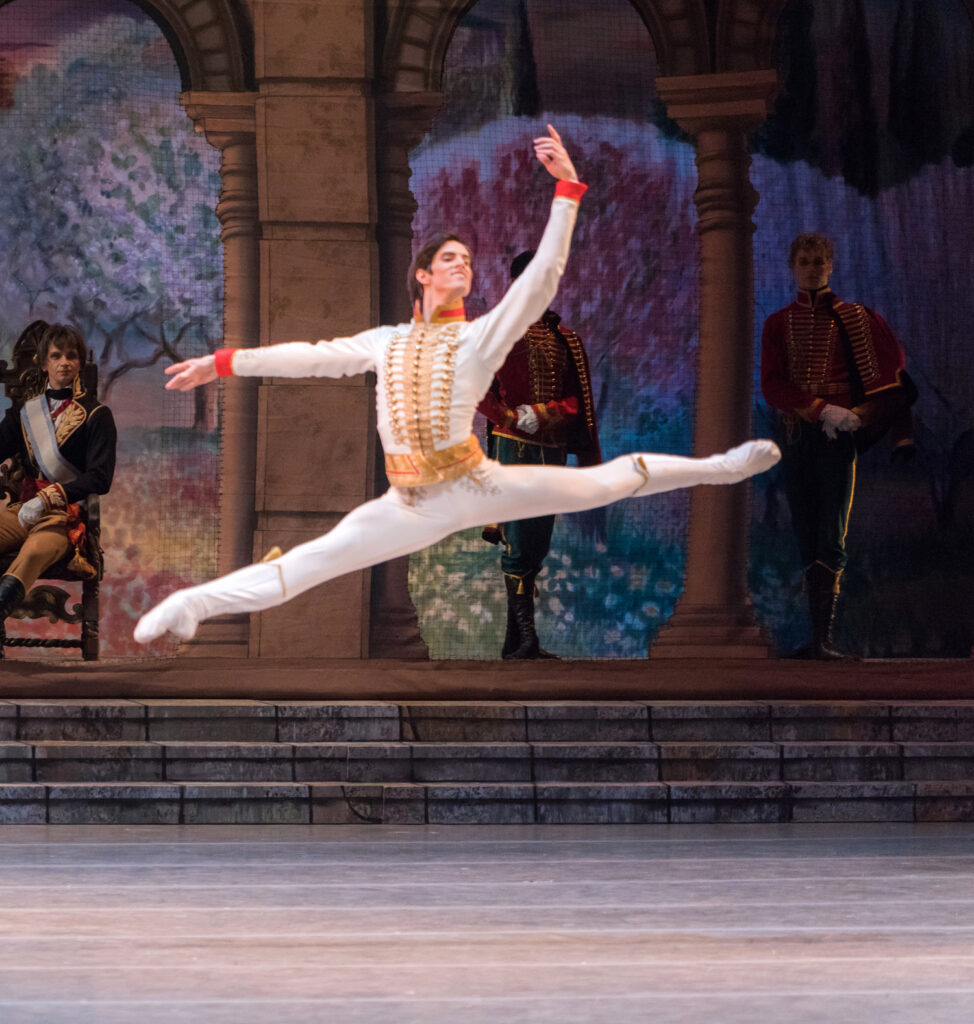 The programme notes for the premiere of Paquita at the Mariinsky emphasize the fact that the ballet is not a revival of the mid-19th century ballet by Petipa, but a new creation based heavily on Cervantes’ novella, The Little Gypsy Girl. That much is evident from the libretto, set around the idea of a royal baby stolen and raised by gypsies, who then falls in love with a high-ranking officer and ultimately finds her real parents. This new version differs widely from the original libretto from 1846.

That 1846 ballet also depicts Paquita living with gypsies, but focuses on a visiting French General who wants his son, Lucien, to marry the Spanish governor’s sister (at the time, Napoleon had just occupied Spain, highlighting political ties between the two countries). Lucien falls in love with Paquita instead. Both the governor and the gypsy chief are against the match. A monument in the town to the French General’s brother is erected, and Paquita compares it to the portrait in her locket — it turns out she is in fact Lucien’s cousin, the General’s niece. A spectacular wedding closes Act III in usual Petipa fashion.

While these themes are similar, the current Paquita has two choreographers, different sets, and an altered libretto, consequently not resembling the original ballet much. When the curtain rises, we see a Spanish manor with gigantic paintings of Cervantes, Minkus, Petipa, Kshessinskaya and others hanging from nearly all-black stage sets. Paquita’s parents, dressed in noble clothing, are rocking her in a bassinet, but leave the child alone in the room briefly. In those few moments, a group of gypsies enter and steal both the family treasure and the child. By the second scene, Paquita is a fully grown gypsy girl in the town square. Andrés, the young officer or caballero arrives, falls in love with her and, forsaking his uniform for gypsy clothing, agrees to travel with the gypsies for two years in order to prove his love for her.

Paquita had three casts, one for each of the first three performances. In the third cast, Anastasia Kolegova replaced an injured Oksana Skorik at the last minute, alongside Xander Parish as Andrés. It should be said that the bulk of classical dancing in this production comes in Act III. The first two acts focus on character dancing, though Paquita and her friend Cristina both wear pointe shoes. From her first entrance, Kolegova depicted a wide-smiled, vivacious Paquita with a flirtatious aura. When handed the poem she’s requested to dance to, she performs a series of piqué attitudes while reading it, before saucily refusing to cooperate. Parish infused the role of Andrés with a sunny demeanor and sharp head accents. His gorgeous arches curled a perfect finish to the end of an à la seconde developpé, and yet his entire emotional focus was on Paquita. When she gestures that he’s an officer and she a gypsy, he brushes away the obstacle with an easy wave of the hand, as if to say “No problem!” The lighthearted tone of Paquita is one of its more endearing qualities, the choreography for various sets of officers is another. Smekalov’s strength is apparent in the step combinations given to the military men, themes that repeat throughout the first two Acts. Boris Zhurilkov, who danced the role of the General’s Secretary, executed a clean double tour in passé, introducing the other sets of officers. For them, sharp movements, a turned-in hand-pose, and ample use of canon all underscore the structures of a military regiment.

A moment of kitcsh was inserted as well when Andrés is tasked with lassoo-ing a “horse” in the gypsy camp (the horse is performed by three men hidden under a potato sack). Parish manages to accomplish the feat — a moment of victory that most of the audience enjoyed.

In Act II, more drama is created when a wealthy widow’s daughter, Carducha, suddenly falls for the “gypsy” man Andrés. Tatiana Tkachenko enacted the role of Carducha with calculating cleverness and stern pantomime, managing to arrest both Andrés and Paquita for stealing her household silver – a crime the two did not commit. The ensuing fight results in an officer killed. The couple go to jail.

But it is the Grand Pas of Act III that most audience members waited for. Instead of the Petipa version, Yuri Burlaka took music from various old ballets such as Corsaire, Kandabel and Kamargo, rechoreographed the variations, and reinserted them. The result is seven variations followed by Andrés’ solo and the famous third Act fouettés.

The first variation, danced by Maria Ilyushkina to music by Drigo from Tsar Kandabel, proved superlative. Her lovely legato and a perfectly held arabesque showed a glimpse of a future soloist in the making. In the third variation, Shamala Guseinova delivered nice bounce and ballon in her jumps. Kolegova’s solo, decorated with Spanish arm poses with sustained extensions in her jumps and a Kitri-like flair. Parish’s executed his challenging final solo with ease, sissonnes delivered like rubber bands, and clean double tours. The tableau finish to Act III, with the slow drop of flowers on an overhead scrim, adhered to the classical Petipa tradition of a closing pose.

Paquita is not a historical milestone, but a mixture of both old and new that provides food for thought on the direction of revivals of historical works. The value of reconstructions is sometimes limited to their position as marker of past tradition that may not always function effectively on modern viewers. Likewise, full remakes run the risk of butchering history. This Paquita attempts to land somewhere in between. By acknowledging that it is not a remake of the Petipa version, one can view it as a new creation, inspired by the past but adapted to hopefully please present audiences.