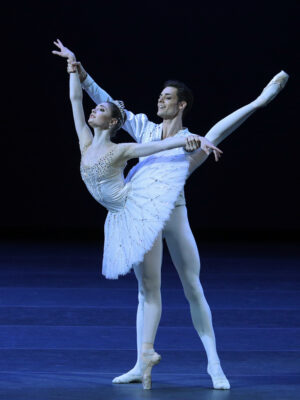 The main houses in Russia have devoted their spring seasons to Petipa, either highlighting warhorse classics that are, in this country, constantly in the rotating repertoire, or creating special gala evenings to honor the choreographer. In March, the Mariinsky began a series of performances honouring the great master, inviting artists from the Bolshoi and beyond to dance Petipa works. And after a series of Bayaderes last month, the Bolshoi held two gala concerts with mixed-bill divertissements including foreign guests as its own tribute.

The Moscow evening, which clocked in at a cool four hours, included 20 excerpts from various ballets. Sadly, following nods to the main players — Sleeping Beauty, Talisman, Swan Lake, and Don Quixote — the rest of the programme veered into neoclassical or even modern territory, encompassing Macmillan’s Manon, Roland Petitis’s Le Rendez-Vois, Preljocaj’s Le Parc, and works by Wheeldon, Gsovsky, Patrick de Banaa, Sidi Cherkaoui, Russell Maliphant and others. (Manon was last performed at the Mariinsky on May 1, 2005, when the troupe’s rights to the ballet ended, and only recently has the Perm Ballet obtained rights to Macmillan works, making even an excerpt from the ballet a delicious treat). In and of itself this departure from classicism wasn’t a problem, since many of the works were expertly performed during this gala, but the focus on Petipa was lost entirely at points. Some of these pieces would have fared better in a simple international ballet evening without the Petipa focus. Le Parc, for example, runs regularly at the Mariinsky; and the modern works performed by Manuel Legris and Isabelle Guerin were intriguing if flat, but nonetheless misplaced on this bill.

The evening opened with one of the Bolshoi’s most promising young ballerinas, Alena Kovaleva [see Catherine Pawlick’s interview with her in the July issue of Dance Magazine USA] alongside Jacopo Tissi in an excerpt from Balanchine’s Diamonds. While not Petipa, Act III of Jewels was Balanchine’s nod to Imperial traditions. Just two years after her graduation from the Vaganova Academy, Kovaleva is one of those upholding classical norms, with exquisite long limbs and a youthful interpretation of the mysterious duet that still holds room for nuance as she matures.

A compact Anastasia Denisova alongside Artemy Belyakov performed the Bluebird Pas de Deux from Sleeping Beauty with clean delivery. Beylakov managed sustained faillés in the assemblé sequence, and clear entrechat six throughout. In her variation, Denisova’s meticulous retiré passés decorated the classical positions, her bourrées aflutter. In the coda, his series of crisp brisé volés brought applause from the audience.

Ekaterina Kondaurova and Yuri Smekalov from the Mariinsky graced the stage in the duet from Le Parc. The aerodynamics of their “spinning kiss” impressed, but this pair could have won over the audience with any number of classical works as well.

Anastasia Stashkevich joined Vyacheslav Lopatin in the Talisman duet. Lopatin is an endlessly versatile performer who just as easily portrays Romeo as he does a cannonball gala piece. He set off in a series of double saut de basques and decorated the dance with perfectly classical hand and wrist positions, a component that not every male displays. Stashkevich proved reliably accurate in her jumps and turns. 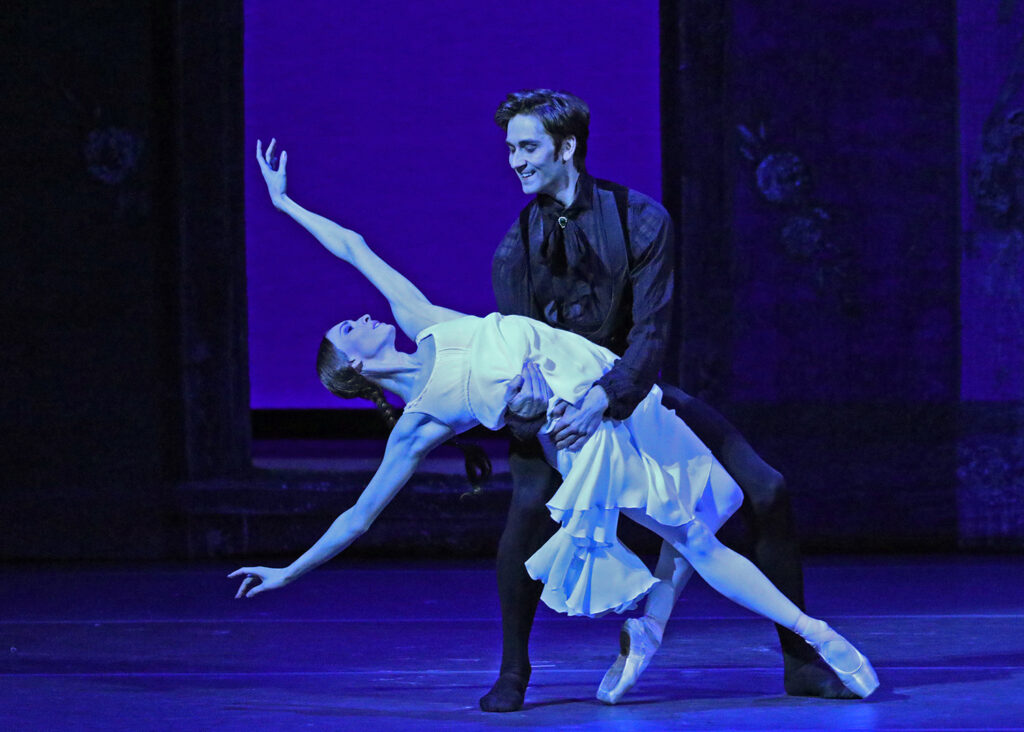 Witnessing the sweeping lyricism of Olga Smirnova in the dream duet from Cranko’s Onegin, alongside guest Friedmann Vogel from the Stuttgart Ballet was a true treat. Smirnova so perfectly embodies Tatiana that it’s difficult to imagine another dancer doing the role such justice.Feminine without being overpowering, she floated through each of the overhead lifts; Vogel’s faultless partnering in this complex piece rendered the delivery masterful.

Even the small edits made to the White Swan Pas de Deux, danced by guest Lucia Lacarra and partner Martin Dino, detracted from Petipa traditions, despite her impeccable lines and his expert timing. The edits are jarring when used to the nuances of the “original”. Indeed her delicate battu at the end of the morphed into an odd allongé pose before the final notes of the duet. The eternal question arose, why must everyone alter what works?

Natalia Osipova has become an international ballet superstar over the past decade, but her incredible physical abilities were lost in Qutb, choreographed by Sidi Cherkaoui and danced alongside Jason Kittleberger. Clothed in jeans and a bra, the twisting undulation to a taped recording did little to impress. She fared better in the excerpt from Manon alongside Vladimir Shklyarov later in the evening, where her insistent flirtation fed Shklyarov’s infinite enthusiasm against the backdrop of their seamless partnering. This level of virtuosity won the couple significant applause; if not Petipa, there was at least exhilarating mastery and boundless ebullience from both dancers.

Nureyev’s version of the Don Quixote Grand Pas, for all its popularity, suffers from anticlimactic choreographic alterations to the Mariinsky-Petipa classic. As such, while Ludmila Pagliero did the duet justice, the missing overhead lifts into “fish” dives –which accent the score’s crescendos in the original– make the Nureyev version feel withered. Yet she added Spanish spice to the épaulement, and Mathias Heymann’s backwards double tour into arabesque showed some of his skill; one wanted to see the couple in the unaltered Mariinsky version.

A bright light of shining virtuosity, the Mariinsky’s Viktoria Tereshkina always offers unwavering reliability in anything she dances. She approached Balanchine’s Tchaikovsky Pas alongside Vladimir Shklyarov with that same steely technique and warm presence. If the work is not an affirmation of Petipa tradition, the pair at least displayed high level technique: both have appealing stage manners, and Shklyarov, in particular, has the uncanny ability to accent his delivery such that the audience wakes up and takes notice. 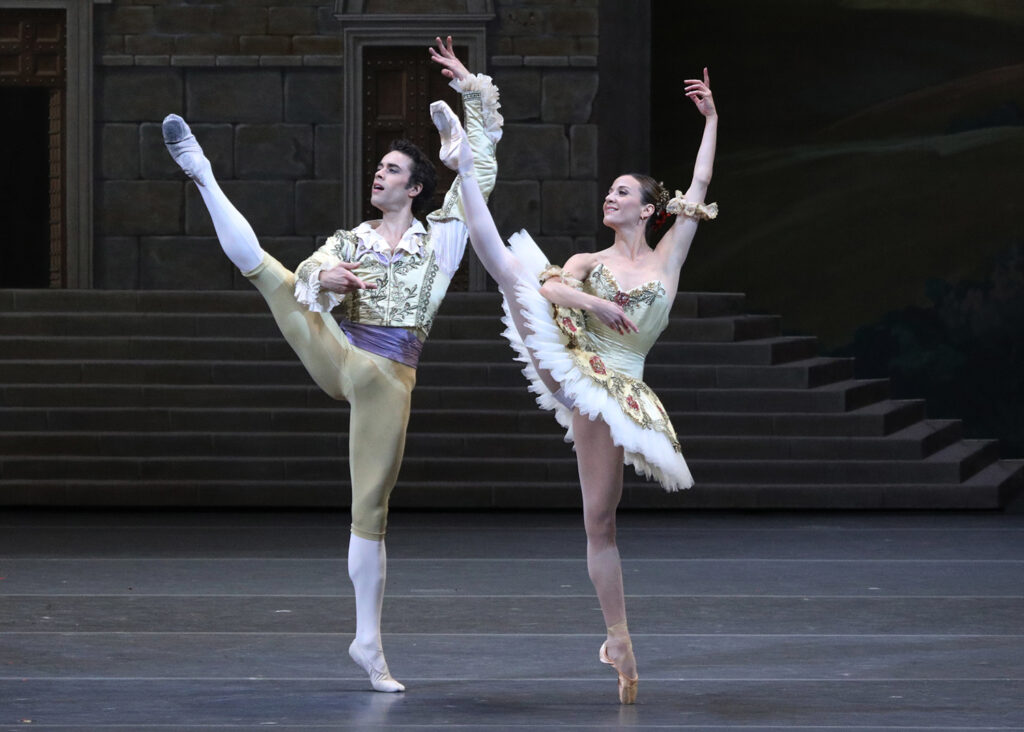 The greatest highlight of the evening, in purely modern terms, was Marcelo Gomes joining Alessandra Ferri in the duet from Christopher Wheeldon’s After the Rain. Though the piece itself bears no relation to Petipa, the beauty created by these two masters brought tears to more than one set of eyes in the audience. Set to tinkling piano notes and violin chords in a recording by Arvo Part, the piece is hauntingly beautiful, and complex in its simplicity. The partners begin side-by-side in a simple tendu, sway in unison, mirroring each other’s movements, then she takes his hand, inciting an undulation of his head and neck, and the duet begins. As the couple carve various shapes in space, from hunched forms to overhead lifts, the overall feeling is one of tenderness through a visual depiction of the melody. There’s an unspoken gentleness in the exchange, one too often missing in human relations, but tangible in these steps.

Margarita Shrainer and Igor Tvirko awakened us from that illusory reverie with an energetic rendition of the Flames of Paris pas de deux. Shrainer’s cannonball piqué turns and his revoltades showed some of the pyrotechnics that the Bolshoi dancers champion.

From there, finally we witnessed true Petipa when the Mariinsky’s longtime soloist, Olesya Novikova, joined husband Leonid Sarafanov, now a principal at the Mikhailovsky, in the late Sergey Vikharev’s reconstructed version of The Sleeping Beauty pas de deux. With low elbows and poses that accented Tchaikovsky’s score, Novikova perfectly emanated the old Imperial style as we imagine it to be. Sarafanov, whose indomitable technique makes him at ease in even the most challenging of step combinations, appeared even more refined in his delivery than usual. The couple’s physical styles prove complementary to the choreography, offering a glimpse of what Petipa truly represents.

The crowning glory of the evening though was the Act III Grand Pas from Grigorovich’s version of Raymonda, after Petipa. Despite variations in tempo (the bourrées into a supported pirouette that finish in arabesque sped up the final notes, which the version housed at the House of Petipa does not do), the closure of the evening on a courtly note seemed fitting. Here the regal Olga Smirnova emitted controlled Slavic grace with every arm and head gesture alongside the enviable lines of Semyon Chudin. Her purity matches Chudin’s — his split jetés feature a high front leg that darts through space. The unstoppable Margarita Shrainer reappeared for the interpolated variation with immeasurable energy. A well-rehearsed corps de ballet, and honest effort from the quartet of males in the charming canon of tours section, reflected the director’s recent efforts to raise the bar among the lower ranks, efforts that are now proving fruitful.

Moscow was blessed to receive such an array of foreign guests for this unique event during a year dedicated to what would have been Petipa’s 200th birthday. The glimpses of virtuosity, whether in modern or classical works, paid homage to a choreographic genius whose creations remain unparalleled even centuries later. May his traditions continue to be preserved in Russia and beyond.