The Return of the Pharoah’s Daughter – Bolshoi Ballet – March 2019 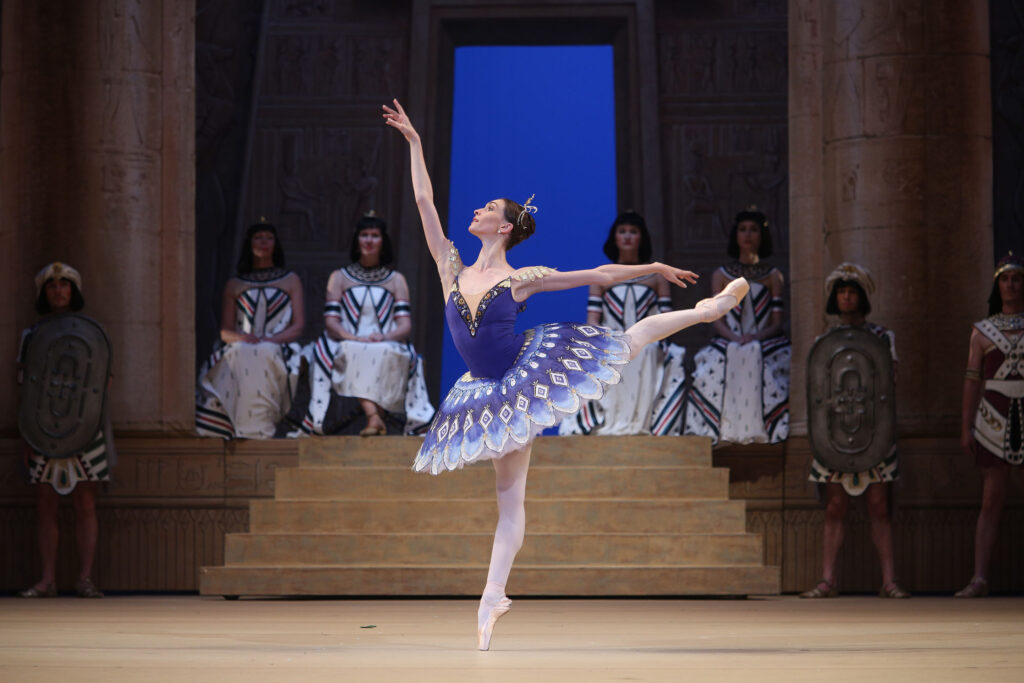 The Pharoah’s Daughter, one of Marius Petipa’s original ballets, is a work nearly unknown in American and European houses but that reigns supreme on the Bolshoi stage, where today it is almost exclusively performed. However, those performances occur quite rarely. A block of Pharoah revivals closed out last season in July 2018 for those Muscovites who had not already abandoned the city for vacation time. This week Moscow audiences enjoyed their only glimpse of the ballet for the current season in a series of 6 performances over the span of 4 days.

This large-scale work, in every sense of the word –from sets and costumes, to the large number of cast members and even animals required for all three acts– is a restoration by France’s Pierre Lacotte dating from 2000. The libretto sets the action in ancient Egypt, where a British explorer finds himself smoking opium and falling into a dream. Reminiscent then of the last act of Bayadère (Solor too smokes opium before his dream of the Shades), Pharoah also has components of Romeo and Juliet‘s star-crossed lovers: the heroine Aspicia throws herself in the Nile River when she cannot be wed to her beloved Taor. But in a true fairytale twist, she’s saved by the God of the Nile, who resembles Poseidon with a trident and long golden locks.

The March block of performances featured a series of debuts, including Margarita Shrainer next to Vyacheslav Lopatin in the leading roles and, on closing night, the ever-reliable Ekaterina Krysanova alongside Vladislav Lantratov in his debut as Taor.

Krysanova, a dependable ballerina steadfast in her attention to detail and impeccable delivery, is frequently cast alongside Lantratov in leading roles. Whether partnered by him in Onegin or Romeo, her dancing is unfailing in terms of both technique and artistry. She portrayed the Pharaoh’s daughter Aspicia as a noble, elegant young woman clearly in love with Taor but unwavering in her refusal to marry the Nubian prince. She depicted her refusal with unambiguous insistence during the pantomime sections, and in the duets (at least one per act) with Lantratov, she executed every piqué onto pointe, every pirouette with precision.

Lantratov is without a doubt one of the most talented yet unsung heroes on the Bolshoi roster today. One of the leading dancers chosen to portray Rudolf Nureyev in the recent Nureyev production, he is also repeatedly cast at the last minute to replaced injured dancers (Denis Rodkin November 2018) or those on tour. That he had only 9 days to prepare this extensive classical role speaks volumes not only to the depth of his technical talents, but to his untiring work ethic. A word then must be said about the choreography in Pharaoh, which is not at all intuitive and heavily resembles Bournonville in terms of style: plenty of à terre steps, jumps without preparation (balloné battu jeté), with port de bras en bas during extensive sections of batterie. These sequences look heavy when not done correctly and require intense amounts of energy to pull off with lightness and aplomb. Act 1 features a combination done in unison with Krysanova: entrechat six, pas de bourrée, brisé, repeated across the floor, which the pair delivered with sweeping ease. Act 2 features a tender duet between the two of them inside the pyramid, followed by Krysanova’s variation with plentiful ballonés. At one point Lantratov, arms in first position en bas, performs a series of entrechat six moving to the right, punctuated with jumps in second. He executed it perfectly, to an uproar of applause. His Act 2 variation uses the music that many may recognize as that for the Talisman variation. Power and a commanding sense of musicality envelope his dancing throughout this ballet, and indeed throughout any performance of his.

Pharoah features a charming underwater scene in Act 3 that interjects a dreamy adagio between Krysanova and her 4 underwater cavaliers, before the God of the Nile agrees to allow her back up to the earth. This Act features variations by three “rivers”, each by a different dancer. While the programme listed Margarita Shrainer for the first variation, it seemed to be an error, for the dancer resembled Eleonora Sevenard, decked out with red trim on her silvery costume and dancing to the tune of castanettes. Maria Mishina, a lovely delicate dancer, performed the adagio Congo variation to sounds from the xylophone and plucked violins, her row of ballonés accented with pas de chats and piqué attitudes.

Cezar Pugni’s engaging score manages to keep even the most amateur balletomanes engaged throughout the nearly three-hour production, and at the baton of Pavel Klinichev the Bolshoi orchestra sounded in top form. For those who missed it, it’s one of few productions that will never disappoint, and with an all-star cast such as that on the 10th of March, it’s impossible to go wrong.

Unfortunately, per their policy, the Bolshoi Press Office did not have a staff photographer cover the debuts in this block of performances. They routinely only shoot the very first premiere. Hence all photos available to press include primarily Zakharova and Rodkin. Sadly there are no photos of these wonderful artists Krysanova and Lantratov (or other debuts) available. I have provided other photos to give an idea of the sets and costumes. Photo at top: Olga Smirnova as Aspicia by Elena Fetisova. Second photo by M. Logvinov.