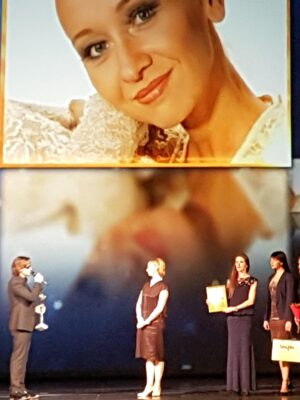 A little known awards ceremony, the “Spirit of the Dance” awards, was held at the Stanislavsky Nemirovich-Danchenko Theatre in Moscow on 27 April to honour the winners from 2016 in categories ranging from rising stars to talented pedagogues and even informative ballet critics.

The evening, structured in a format that combined award ceremony with gala concert, interspersed the presentation of awards with short numbers acknowledging each winner. Though running nearly 4 hours, specific dancing highlights punctuated the evening that covered a range of styles from folk to classical ballet.

The first artist to make his mark during the evening, Yuri Kudryavtsev, performed the pas de deux from La Sylphide alongside Ekaterina Bulgutova. Both leading soloists form the Kranoyarsk Theatre of Opera and Ballet, Kudryavtsev is a tall young man with clean beats and light ballon with a promising future ahead of him. Bulgutova evoked a mischievous sylphide with clean delivery and proved a lovely onstage match for her partner.

Although Inna Bilash, the young talent who recently debuted during the Mariinsky Festival in Alexei Miroshnichenko’s Swan Lake, proved the recipient of another “Rising Star” award, the excerpt she danced alongside partner Nikita Chetverikov drew equal attention. The pas de deux from Miroschnichenko’s Cinderella opens with the young couple in 1940s clothing (a sailor dress for her; slacks and tie for him), holding a blue balloon that is later released to the ceiling. The sweeping duet provides moments of lyricism couched in Prokofiev’s infectiously romantic score. Bilash’s ebullience in this love scene was palpable, and Chetverikov managed a single-hand overhead lift, maintained for at least 8 very slow counts. The work itself underscores Miroschnichenko’s visionary talent for choreography. It debuted just one week ago in Saint Petersburg, and is a work that truly should tour abroad.

The “Knight of Character Dance” award went to Pyotr Nadbitov of the Kalmiki Dance Theatre. In his honour three men from the Igor Moiseyev State Academic Dance Ensemble performed a brisk, macho number created by Moiseyev himself. Then Ksenia Zhiganshina and David Suarez from the Bolshoi performed the pas de deux from Le Corsaire in honour of the award for “Press Leader” given to Katerina Novikova, the press attaché at the Bolshoi for over a decade. Ballet critic and lecturer of the Vaganova Academy, Olga Razanova, received the other “Press Leader” award. Suarez, a new addition to the troupe, has long legs that achieve splits in mid-jeté and strong double tours. Zhiganshina’s simple smile decorated her dance, which reached a peak when she elected to perform double fouettés in succession before shifting to singles during the coda.

In Act II, Vladimir Varnava received an award for choreography, after which Danil Roslanov and Joy Womack from the Kremlin Ballet performed the Black Swan Pas de Deux in honour of Zhanna Bogoroditskaya, a pedagogue in their troupe. Although Womack had difficulty with the attitude turns in her variation, and lacked a strong sense of Odile’s slyness, the couple’s effort in this difficult duet was visible.

Anna Sherbakova, the first recipient of the “Star” award on the programme, graced with long limbs and lovely graceful movement, performed the Gypsy Pas de Deux from the ballet “Marinula”. An impressive spitfire, Olga Chelpanova of the Sapayev Maryy Opera and Ballet Theatre from the republic of Maryy El in Russia, was awarded one of three awards for “Star”. Her performance in the pas de deux from Esmeralda demonstrated full mastery of the classical lexicon, familiarity with the tambourine, and a delightful, ebullient presence. Her reliable partner Konstantin Korotkov was a supportive and complementary match.

Two talented males also received the “Star” award: the long-limbed Viktor Lebedev of the Mikhailovsky, who performed an idyllic, soulful Solor from Bayadere alongside Anastasia Soboleva, and powerhouse Igor Tsvirko of the Bolshoi, who performed Flames of Paris with Margarita Shrainer. These two top-level premieur danseurs both offer the best of classical technique in their respective troupes and deserved the honours bestowed upon them.

Sponsored by the Russian magazine “Ballet” with support from Grishko and RosKoncert, the “Spirit of the Dance” awards are a necessary addition to the ballet world.