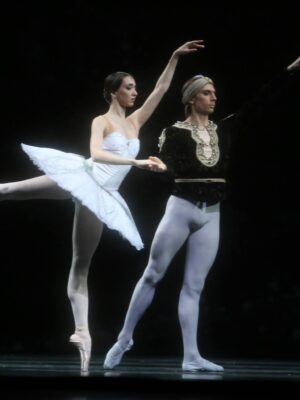 The Stanislavsky first premiered Natalia Makarova’s version of La Bayadère in October of 2013, a version that varies greatly from the traditional Petipa version that runs on the Mariinsky stage. With a rearrangement of the libretto, a reshuffling of the musical score, and different costume designs by Yolanda Sonnabend, the version is a jarring contrast to those used to the traditional Petipa, with numerous unnecessary changes. Indeed, the desire of big name dancers to “adjust” classical warhorses is an ongoing challenge in the world of ballet. But the talents of the Stanislavsky dancers manage to compensate for these shifts, attesting to the troupe’s deep capabilities. 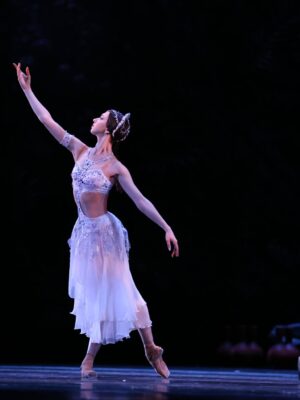 On 4 May, Erika Mikirticheva debuted in the role of Nikiya. Blessed with solid technique and supple arches, it is a testament to her hard work that she was able to carry the three-act ballet to its finish with finesse. (She was out due to an injury for a significant stretch of time recently.) Her greatest strength are her jumps –long-lined grand jetés that attack the air with power– and an ability to emit the soulful nature of Nikiya with sincerity. Solor, danced by Dmitry Sobolevsky, a veteran dancer and reliable partner, was hampered only by the vague costume of his role in Act I, dressed in grey and gold garments that hardly set aside the character from the corps de ballet. Nevertheless, Sobolevsky’s stage manner is honed, his Solor performed with noble carriage and the ability to fly through steps such as the double saut de basques in Act I. 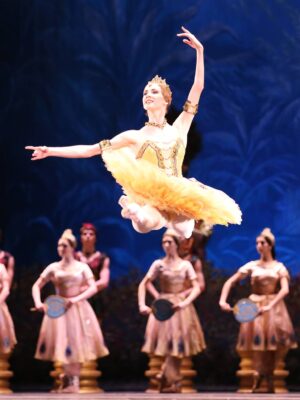 Natalia Kleymyonova, a beautiful, slender-limbed ballerina with clear acting skills, danced an adequately cunning Gamzatti and carried out the technical aspects of her role with confidence: high cabrioles decorated her wedding-scene variation, her every position etched with textbook accuracy. Kleymyonova’s dancing was dominated throughout by Gamzatti’s utter thirst for revenge.

In this version, the Shades scene comes in Act II, and the Bronze Idol appears only in Act III. The Idol dances his variation on an empty stage, no child-slaves or courtiers surround him, just a giant statue onto whose steps he retreats at the finish. Yuri Vyuibornov, sporting an impressive physique, performed the honours of this role, offering razor sharp positions and utter musicality throughout. 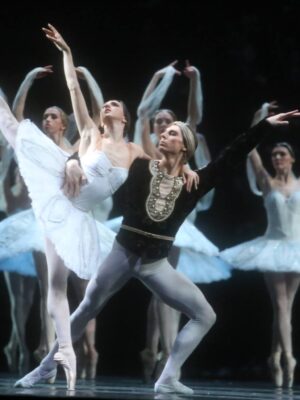 The cuts and additions to the score are too many to list. But the primary change to the libretto is the return of the historical ending with the destruction of the temple at the ballet’s close. This dramatic scene ends when the dust clears, opening to an apotheosis: Nikiya and Solor, both dressed in white, on a white stairwell to heaven between white clouds. The message seems to be, let no man separate what God hath drawn together.