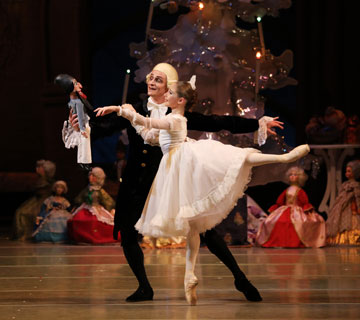 Starting on the 4th of December, Vaganova Academy students performed three Nutcracker performances prior to the end of 2021 in which, per the usual tradition, former graduates danced Clara and the Prince with students dancing all of the other roles.

The Academy has been plagued with the pauses and restrictions that come with the Covid pandemic– instead of graduation performances on stage the Mariinsky, last year the performance was held inside the Academy’s small theatre. More recently, restrictions have lifted slightly, and in addition to performing in their own “Nutcracker”, the students have also participated in the Mariinsky’s “Sleeping Beauty” and “Shurale” within the span of the same month.

At the general rehearsal of this Vainonen “Nutcracker” –performed to a full orchestra with costumes– Maria Koshkaryova, who will graduate in 2022, danced the first adult Clara. Koshkaryova is a slight, petite brunette, with long slender limbs and a youthful appearance. She shows much technical promise. For the first performance however, Anastasia Lukina, already with the Mariinsky since 2015, danced “big” Clara with professional polish and noble presentation. If not emitting the youthful freshness and raw sparkle of a student, her refinement and  are evident throughout. Lukina has gained greater control of overly flexible feet and limbs over the last five years in the troupe, giving her great command of the  stage, in addition to her natural beauty. 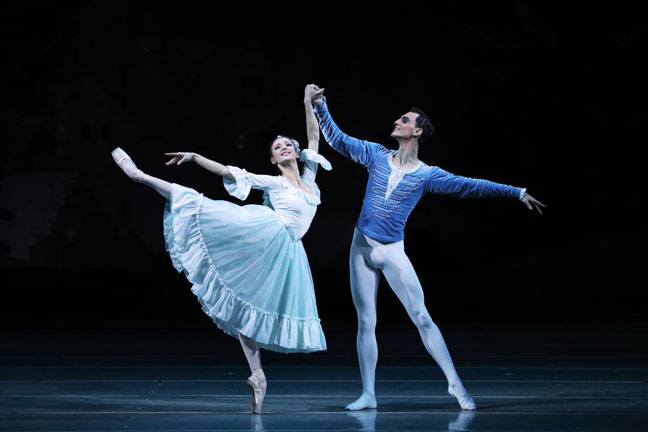 Little Clara, who appears at the start of the production, was danced by Natalia Furman. A petite, doll-like brunette with an expressive face and high arches, Furman appears to have the type of physique that will grow into a successful ballerina, and the acting skills to go with it.

Mikhail Barkidzhidzha, a 2019 graduate, danced the role of the “adult” Nutcracker Prince, supporting Lukina in the lifts and turns with poised carriage and an endless smile. Tall with a long neck, Barkidzhidzha was born in Chicago but graduated from the Academy. Increasingly these types of dual nationals are attending the Academy and then joining the Mariinsky. It is said that “Bark” as per his Instagram last name, is a favorite of rector Nikolai Tsiskaridze.

The children of several former dancers participated in the production, and this is the first year that VaganovaToday has witnessed this “second generation” appearing on stage. Alexei Sarafanov, son of now former Mariinsky and Mikhailovsky principal dancer Leonid Sarafanov (who was just appointed artistic director in Novosibirsk) performed the role of Franz with mischief and verve. While his dancing abilities are hard to judge in this mostly acting role, his sophisticated dramatic projection suggests he has at least a significant aptitude for pantomime and acting. Ivan Volkov, the son of Academy artistic director and former Kirov ballerina Zhanna Ayupova, danced one of the two males in the Russian Trepak with accented style. And Georgiy Krebtov, son of Maxim (former dancer with the Mariinsky) danced and mimed the role of Mr. Shtalbaum in Act I with elegance and grace. 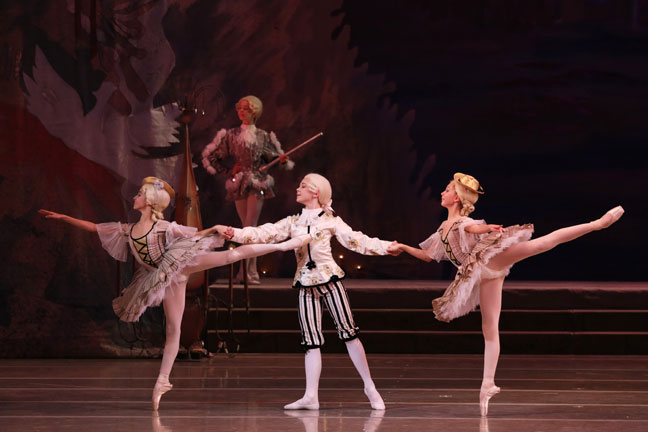 If one were to pinpoint some of the pure dancing highlights, the snowflakes in Act II offered a tireless section of crisp steps — from jetés and bourrés to turns.  Sofia Valilullina, one of two soloists, performed beautifully in the waltz next to Yaroslavna Kuprina who also offered professional delivery.

But perhaps the most endearing moments of the production — the battle between mice and soldiers, the live cannons (6 shots total are fired, for young boys in the audience who may wish to know)– and the Act III “sweets” provided the most entertainment to the multitude of children in the audience.  Anastasia Voloshko and Andrey Kitayev danced a sharp Chinese dance, and the “classical trio” which in the West is known as the Mirlitons or Shepherdesses, was performed with miniature perfection by Yasmin Azis, Maria Selivanova and Saveliy Iudin.

Although one wished to see Vaganova students in the two leading roles if only out of curiosity, the rest of the performance suggested that the up-and-coming talent in the Academy’s ranks is something to look forward to with eager anticipation. 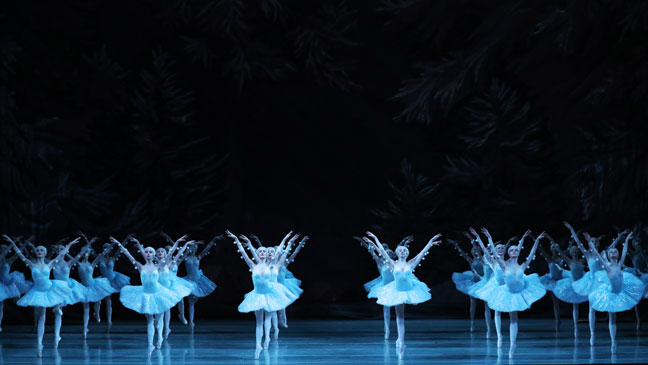 Finally,  incomparable sound emanated  from the orchestra pit under the baton of Gavriel Heine, whose recent marathon of performances underscores not only his professionalism but his endurance.

Photos courtesy of the Vaganova Academy of Russian Ballet.